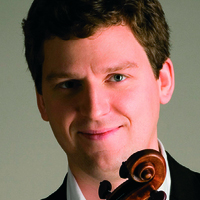 At the conclusion of the concert conductor Arvo Volmer bowed deeply to concertmaster Natsuko Yoshimoto as if to offer heartfelt thanks and respect to her and to the combined talents of the Adelaide Symphony Orchestra.  And it was much deserved, for the ASO had been at the height of its power as it gave masterful performances of Wagner’s Prelude to Act 1 of Lohengrin, Britten’s Violin Concerto which featured the very classy James Ehnes on violin, and Brahms’ Symphony No 4.

Volmer’s treatment of the dynamics in all three pieces was elegant and finely balanced.  The gradual crescendo and decrescendo in the Wagner allowed the piece’s layers and sensuality to come to the fore.

Although Britten completed his violin concerto in 1939, this was the first performance by the ASO — nearly 75 years later — and judging by the reception it received from the audience it is destined to be revisited.  A major part of the audience’s enthusiasm was because of the virtuosity and musical comprehension exhibited by Ehnes, but Volmer must also be congratulated for the outstanding partnership he forged with Ehnes.  The concerto is episodic in nature with numerous and varied melodies that reference Britten’s hatred of war.  It includes many unusual instrumental pairings, with the violin in dialogue with trumpet, tuba and trombone as well as others, and the challenge is to ensure these strained and sometimes uncomfortable musical conversations are clearly heard above the rest of the orchestra.  The tempi are vital, the dynamics more so, and Volmer nailed it all.

The Brahms symphony is perhaps his most popular, and it is almost exhausting to listen to.  It is brimming with luxuriant melodies and the execution of the entire composition demands strength and agility from all sections of the orchestra, even if the likes of Jackie Hansen on contrabassoon and Steven Peterka needed to patiently wait until the third movement before ‘their bit’!

The ASO delivered in spades. A most memorable concert.