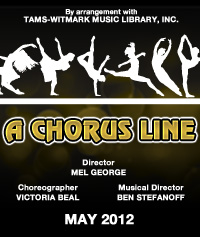 A Chorus Line is not an easy show to cast, and the complicated nature of this show was never clearer than when watching an amateur production. The show requires its players to be accomplished singers, dancers and actors; and is unforgiving when a particular aspect is lacking.

Director Mel George has done well with her casting, and all of her players were exceptionally strong in at least one of the three areas. Many people would say that A Chorus Line is a ‘dancing show’ and there is no doubt that the dancing is crucial, but choreographer Victoria Beal has demonstrated that it can be very successfully modified to suit the skill level of your performers – the acting however is an entirely different kettle of fish, and requires the players to deliver strong and considered characterisations which are interesting as well as honest.

On percentage, most of the show is spoken monologue or sung solo direct to audience; and if it’s not delivered by great actors, has the potential to get boring very quickly. On the whole George has managed to avoid this and keeps the mood light, interesting and entertaining.

Musical Director Ben Stefanoff conducted a fine orchestra on opening night, and musically the show never skipped a beat. Occasionally the drums in particular were too loud and drowned out the voices, but this is more likely an amplification issue rather than a musical one.

Of the players, there were definitely standouts and in the category of ‘triple theat’; Anton Schrama as Paul, Kimberley Hein as Bebe, Jessica Knights as Diana and Courtney Allen as Val all shone – with wonderful singing voices, great characterisations and exceptional dance skills.

Of the great dancers, Ali Walsh as Kristine, Barbara Nutchey as Judy, Sophia Bubner as Maggie and David Daradan as Don showed they were also excellent actors. David Salter as Greg showed us his wonderful voice and great character and Kerry Staight had all the moves and attitude for a classy Sheila.

Sam Taylor as Mike was a very strong dancer and Tanya Harris moved well in the role of Cassie. As Zach, David Grybowski was absolutely wonderful in both voice and action. His onstage work had great power due to his stillness which contrasted wonderfully with the dancing.  The rest of the cast including the ensemble were all paramount in the show’s success and should feel very proud of the final result.

Set design was typical (and probably had to be that way due to restrictions on the rights) but the lights were excellent and managed the various transitions very well. Kudos to the spot operators who always hit their mark, and to the costume designer(s), who kept the show looking uncomplicated.

George, Beal and Stefanoff, with a great team of help and a wonderful cast, have delivered an enjoyable version of A Chorus Line. If you like this show, you won’t be disappointed by this amateur production for Marie Clark Musical Theatre.

When: 25 May to 2 June
Where: The Arts Theatre
Bookings: marieclark.asn.au