An Awful Lot of Vaudeville 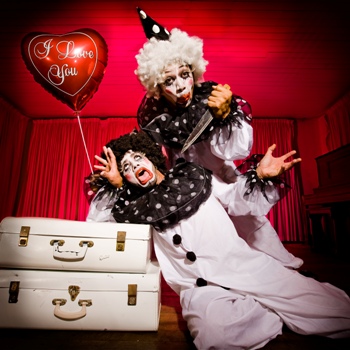 An Awful Lot of Vaudeville is truly that, a little bit of everything! Comedic Transvestites (that is to say Drag Queens who are funny) hoop trapeze and rope twirling, burlesque comedian Vespa White, Mr Boylesque and more.

This cast are solid and pretty damn talented; all that's missing are some specky production values which would transform this show from back room vaudeville to Spiegeltent sensational.

Hosted Fez was hilarious and told some wonderfully funny and personal stories which really connected with the audience - on the opening night Fez closed the show with his own choreographed routine which brought the house down.

Joanne O'Callaghan sang a beautiful rendition of 'I Heard It Through the Grapevine' again production took the glossy edge off with too much crackle and echo on the sound mix, but once O'Callaghan started belting she took control of the room and owned the crowd.

Mr boylesque 2011 performed a few time, but really had the ladies on the edge of their seats in an aerial ribbon display without his shirt.

Disappointingly an error about the start time in the program and on the Fringe site left a foul taste in some audience member’s mouths, when they were shocked to find that their pre-show drink time was actually closer to interval and that half the show had already been missed. The cast were very apologetic and not a soul in the room held it against them, cheering and applauding energetically and quickly putting to bed any ill feeling of the earlier bungle.