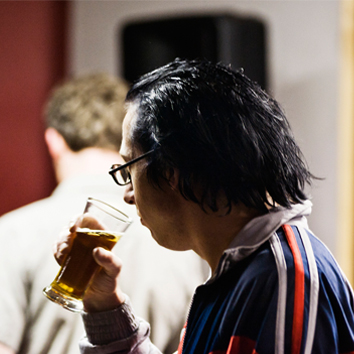 A few scattered chairs for the audience face a blank wall, where two men wait with beer in hand. The fluorescent lighting is pretty bright, but it’s useful for finding your seat and preparing for the show. A dull rumble of music and bass can be heard like a distant nightclub raging into the night.

This show does away with all theatrical conventions. There are no lights up - lights down; there is no curtain; no entrances and exits; no stage; and no bow. The players stand on the floor in front of you as if they too were members of the audience waiting for the show to begin.

Then one speaks. And an hour later – it all makes sense.

Genius is probably not a descriptive enough word, but what creator Benjamin Cittadini has done is reach out and grab hold of a slice of life, which has been reproduced so close to its original form that you could be forgiven for thinking you aren’t just privy to an otherwise private conversation – you are in fact at the theatre.

When you talk about theatre the saying ‘art imitates life’ comes to mind. This production is unique in that it is closer to ‘life imitating life’. And I fully expect that at least half the people who go to see the show won’t like it. The two women sitting next to me were clearly very uncomfortable with the format and the subject matter – but that’s how I knew it was working so well; how I could tell it was being so effective (and affective).

Actors David Quirk and Craig Peade are to be commended on their focus, grasp of naturalism, and absolute intent. It has been a long time since I have sat so close to two actors, acting – and forgotten they were doing so.

Words cannot describe this show – only experience will lead you to understand. I implore everyone to see it. Winner of the 2011 Melbourne Fringe Festival award – this show is a must see.

Go along without expectation. And don’t say I didn’t warn you.

When: 9 to 18 Mar
Where: The Tuxedo Cat - Cat Bowl
Bookings: www.adelaidefringe.com.au