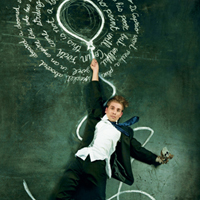 The Escapists, in association with Critical Stages

Bearing a striking resemblance to the quirky 2001 French film Amelie, this whimsical production is an absolute explosion of creative energy and imagination in overdrive.

The enthusiastic one-man story telling session from Lucas Stibbard, with charming xylophone and other old-school manual sound effect backing from Neridah Waters, Boy Girl Wall is about a man and a woman who are perfect strangers to each other, but separated only by the shared wall of their apartments.

Both are frustrated and uninspired in their careers and lacking a special someone in their lives, however, with a little well-intentioned conspiring from some concerned but inanimate observers, the two are thrown together by a well-timed turn of events.

It’s a simple enough story, but the lead up to the moment when the two lonely-hearts meet is anything but – and where the real genius lies. With an endless supply of comic brilliance at his disposal Lucas Stibbard utilises only the most rudimentary of technology, his meticulously co-written script and militant timing and focus captivate the audience with a complex interweaving of interrelated (and not so interrelated) stories that lead to the one ultimate conclusion.

With chalkboards, chalk, sock puppets and an overhead projector with hand-drawn slides as his only props, this production has an organic, hand-made feel about it – like an excited child putting on a play for their friends and family. In this sense it’s also intimate and interactive, with the seemingly infatiguable Stibbard engaging the audience for feedback and using their reactions as well-improvised fodder.

In telling the life stories of Thom and Alethea, he digresses right back through to the dawn of man, the dawn of time and everywhere in between in a stream of consciousness. This is done so methodically and with such intellectual and logical precision that you never get a sense of disorientation.

Part stand-up, part physical comedy Boy Girl Wall  is a zany but lucid celebration of all the fixations and little offbeat thoughts in our heads that make life interesting, but which we seldom find a way to express. It’s a show bursting with idea diarrhoea, but harnessed enough so as to make the final product a coherent, enlivening and exquisitely funny experience to behold. This is inspiration and then some.