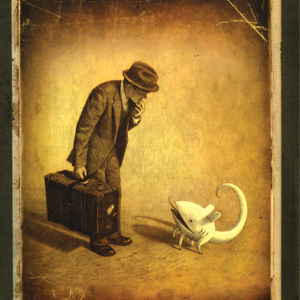 Ben Walsh and Orkestra of the Underground. Her Majesty’s Theatre – 11 September

Based on the picture story book of the same name by Shaun Tan, The Arrival is a musical journey scored to expand on the original work, played along with projections of Tan’s images on a large white screen.

Essentially the story is of an emigrating family, initially separated when the father leaves to make preparations for their new life in another place. Without exposition the images take us on his journey as he comes to grips with the new surroundings, the challenges of different languages and customs, and the agony of being away from his wife and daughter. Along the way he meets other migrants who share their own stories of past suffering and oppression, each of them helping him find his own place in this new world, until his wife and daughter can join him in their new home.

One could write for pages about the skill and sensitivity Tan has demonstrated in the creation of this book and its images; cleverly using recognisable metaphors to help the audience establish time and place; illustrating the ‘New World’ in a style which is alien to the audience, to help them feel the same disconnection and estrangement; and using a cinematic image style which is suggestive enough to follow the story, but open enough to allow the audience’s interpretations and experiences permeate the work.

However, this performance is not about an already published book, but rather the way it has been underscored with some incredibly moving and powerful musicianship.

Composer Ben Walsh is a celebrated musician and drummer who has earned a well-deserved reputation for his ability to score sound scapes for film and drama. Walsh has created a stunning score which alone is emotionally charged and appropriately wistful enough to tell its own story. I found myself often wanting to close my eyes and listen to the beautiful composition of Tabla, Clarinet, Flute, Violin, Sousaphone, Trombone and more amazing instruments – but was always stopped by the projected manipulation of Tan’s amazing images.

Walsh has so accurately captured the plight of Tan’s character; each moment of complete disassociation with the new environment; the heightened fear of acceptance and complete lack of social understanding. All were depicted so deftly and with such clarity, that you could not help but agonise with the hero through his struggles, and rejoice with him in his success.

A commendable use of non-conventional instrumentation was included in the sound scape, including vacuum cleaners and tin cans, as well as pre-recorded audio and sound effects. All this combined created an audible landscape which aided in the audiences transportation to Tan’s imagined world.

This is an outstanding production. Tan’s book (which was on sale in the foyer) has now become a part of the collection on the mantelpiece at home. Walsh’s musical tribute to Tan’s story, a memory to treasure for all who experienced this production.

The poignancy of programming this subtle musical rendering of Shaun Tan’s achingly beautiful graphic novel The Arrival on the 10th anniversary of 9/11 was not lost on the full house at Her Majesty’s Theatre on Sunday night.

The 10-piece Orkestra of the Underground, led by Sydney-based musician Ben Walsh, brought a message of hope and unity at a time when we need it most. With the issue of asylum seekers looming large on the political radar at the moment, it was fitting indeed to re-connect to the central message of Tan’s book: that each human being is precious and, moreover, that they have something unique to offer to society.

I had forgotten just how exquisite Tan’s drawings are and, moreover, how timeless they appear. His work seems to go so far into the specific that it becomes universal. The story of the Arrival is ultimately about the human condition: the bond of family, the yearning for acceptance, the bewildering experience of displacement and the tenacity of hope.

Composer Ben Walsh has created something extraordinary in response. This is not simply a musical analogue of the book, it is much more than that. In a score which owes a great deal to the traditional musics of Eastern Europe (particularly Romania and the Balkans) Walsh traces the journey of Tan’s immigrant everyman with a broad palette of sounds, from upright piano to tabla, sousaphone to vacuum cleaner. The ensemble playing was immaculate, with Walsh himself leading from his drum kit, facing away from the audience. This was novel in itself.

As Tan’s graphic narrative was projected overhead, the band provided an accompaniment that was present in its own right, without being overpowering and complementary without being crassly illustrative. Only very occasionally did the musical material seem to be treading water, or traversing already charted territory.

There were outstanding solo performances from Bobby Singh on tabla, Mick Stuart on percussion and Shenton Gregory on violin and viola, whose solo improvisations were beautifully judged.

The only slight niggle was an annoying earth loop in the sound system, which refused to go away and marred an otherwise excellent mix.