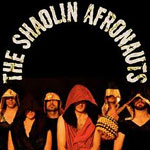 In the build up to their imminent Australian album launch, The Barefoot Review got the lowdown on the creation of ‘Flight of the Ancients’ from bassist and band leader of The Shaolin Afronauts, Ross McHenry.

The heavy afro soul sound of the Shaolin Afronauts created major global buzz this year with the release of their debut album ‘Flight of The Ancients’ on UK label Freestyle records. Lauded by lovers of afrobeat for their unique take on the sounds of 1970’s West Africa the Shaolin Afronauts spirited performances have fast gained a reputation as some of the most exciting live shows around. Inspired by the sounds of 1970’s West Africa, Ethiopia and the pioneering avant-garde jazz artists of the same era, Flight of The Ancients combines and extends these influences into a lyrical musical journey from the Sahara all the way to Saturn. This September, Australian audiences will have the opportunity to experience this 12 piece afrobeat juggernaut in action, playing music from their debut full length release.

“I always wanted to record to tape; from the very first session I produced I was adamant about it” says McHenry. “I think back then I had very little idea why, except that the producers I most admired recorded to tape, so that’s what I wanted.” What McHenry later realised, (probably) while trying to justify high recording costs, was that tape doesn’t only sound better; it creates a workflow like no other medium.

“In the case of the Shaolin Afronauts, it creates a space where the raucous live spirit translated directly onto the LP. Tape limited the ability to edit, and forced me to make production decisions in the moment. Nothing can be fixed later and sounds are permanent. You’ve really got to consider exactly what you want to hear in the room while it’s being recorded, and this forces you to consider sound much more deeply.” McHenry explains.

Most of the tracks on the album are first takes and most of them also contain what would be considered “mistakes”, the type of thing you would fix if recording to a computer. “Leaving them in, because you can’t take them out not only inspires excellence in the musicians you work with (because no one wants to hear a mistake they made go to press) it also forces you to consider tracks as a musical whole, without obsessing over small so-called errors” McHenry said. “I like to think of them as the human elements!”

The Shaolin Afronauts will be debuting the album to South Australian audiences on the 3rd of September at Rocket Bar. They will be supported by Encarta (Live) and DJ’s Japeye, Mehdi and Big Bubba

For pictures of the studio and a better idea of the recording process check out their blog “Two Inch Lifestyle”. http://twoinchlifestyle.blogspot.com/

Also, check out the clip below, filmed by the Your Take Sessions crew earlier in 2011.