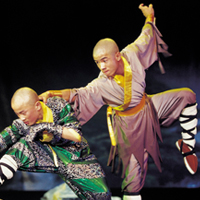 If, like me, your knowledge of Kung Fu extends to watching Bruce Lee and Jackie Chan movies as a kid, or the wonderful David Carradine in the 70’s TV series Kung Fu, then you would have been stunned by the super-human capabilities of the Shaolin Warriors at the Festival Theatre on Saturday night.

In a truly spectacular display of martial arts physicality, including traditional techniques with a huge array of weaponry and dazzling ensemble choreography, the warriors produced a performance that was notable not only for its focus on physical strength, but also the grace and underlying spirituality of their art.

As China opens up progressively to the Western world, it is productions such as this – the first of its kind – which demonstrate the extraordinary discipline and beauty of Chinese cultural heritage, that will create a positive image for a nation that is in the course of the greatest transition in its history. For all the bravura display of strength and masculinity, the show never loses sight of the central tenet of Shaolin; that is the path of non-aggression and enlightenment.

The simple yet effective set, representing the courtyard spaces of a Monastery, combined with atmospheric lighting, dry ice and a musical soundtrack which utilized a range of traditional Chinese instruments as well as batteries of percussion, synthesized sounds and environmental noises, made for a beautifully integrated and balanced show which did not rely on any technological trickery.

There were touching moments also, including a section where the monks invited children from the audience to participate in an impromptu lesson on stage. The humor was never forced or overplayed as the children were corrected in their fighting stances and postures by gentle guiding hands.

Two child warriors dazzled the audience with sparring, tumbling and contortion routines that took our breath away.  There were also demonstrations of ‘extreme’ techniques, such as a master chopping cabbage on his belly with a razor-sharp cleaver, two monks sandwiched together on beds of nails topped with a concrete slab which was broken with a sledge hammer and an extraordinary sequence involving metal bars broken on heads and a monk balancing horizontally on five spears.

Whilst there were gasps from the audience and my near neighbor, who could not bear to watch, this element of the show did not become in any way gratuitous.

A simple narrative structure involving the journey from novice to graduation held the two-hour show together. This was a spectacular glimpse of a tradition spanning more than a millennia, packaged in a commercial and entertaining way that did not compromise the integrity or dignity of the performers.  Shaolin Warriors are the Harlem Globetrotters of Kung Fu. Don’t miss them next time they are in town.