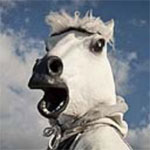 I went to this show only because Steve Sheehan’s Stevl Shefan and His Translator Fatima won the Critic’s Circle Award for most innovative work last year.  Well, he’s innovating again but there will be no awards.  As advertised in a perhaps too implicit way, this is a work-in-progress, a trial run of some new ideas.  It’s great if you want to see a comedian developing a show.  It might have legs, even.  In fact, it’s got eight legs.  There is Steve being Steve, an opera singer who would work better dressed as Brunhilda, and a teenage horse of the miniature variety.  The horse’s first entrance is a great surprise but after that you realise it’s just looking for oats scattered around the place and isn’t really engaged in the show.  There is an entertaining sing-along to a Wagner opera number, but then too much rambling about numbers altogether.  Steve plays a couple of organs well, even with a horse head on.  That was a bit scary, like in Equus.  When he took the horse head off, he had on a curly-haired wig, and I didn’t know if he reminded me of Harpo Marx or Percy Grainger.  A very low watt show – maybe it’s not turning out as Steve would have liked as he was searching for answers from the audience.  Go and give him a hand but try and beat the price down first – even $10 is too much.  Bring a carrot for the horse.