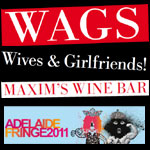 Matt Byrne has once again packed his audience into Maxims Wine bar – Aircon... someone... anyone?

Another spoof in what is becoming a Byrne tradition, WAGS is an attempt at a comedic play on words built around the story of four wives and girlfriends (as the acronym implies) of Aussie Rules footballers attending the Brownlow medal. The show opened to the tune of "It's Raining Men" which had been rewritten as "Out-Rate the Men" and refers to these WAGS being a bigger publicity draw card than the ‘Brownlow’ medal itself.

In true Byrne style, nothing in this spoof misses out on the send up. Best described as a live performance of televisions Fast Forward and the Comedy Company rolled together it consists of bawdy caricatures, short scenes and the pre assumption that the audience will recognize the characters. If you don't follow football, or know who the characters are based on, quite a few jokes will go over your head.

The cast, consisting of Paula Cooney, Eloise Scherer, Tegan Gully and Ali Crew play multiple characters from reporters, to the boyfriends, freeloaders and the girlfriends. The direction; make it big, despite whether it works or not, is the girls biggest success. It is clear that Byrne’s direction was for the actresses to play it large and loud. Individually they are very strong, all giving solid performances with no weak link. As an ensemble they are competing for the funniest one liner, and there are plenty of one liners to spare. Poetry features heavily in the story telling. Four line prose set up each story and end with a predictable joke or pun. Smatterings of laughter filled the room however it was clear that this show didn't appeal to everyone.

This production has a niche market and is well performed, but don't go looking for something tasteful, the taste is a little below the belt.