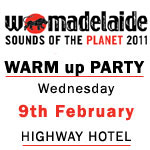 Australia’s most loved music festival, WOMADelaide, will again give Adelaide fans a taste of what’s in store at Botanic park in March by hosting the 2011 WOMADelaide Warm Up Party featuring WOMADelaide act, The Shaolin Afronauts at The Highway on Wednesday 9th February 2011.

Continuing the groove after a hot Afrobeat set from The Shaolin Afronauts, WOMADelaide fans can expect more sounds of the planet to keep the party going from DJ Troy

J Been on the decks.

Beginning at 7.30pm, the night is a free all-ages event but people attending are encouraged to make a gold coin donation towards the Queensland flood appeal at the door.