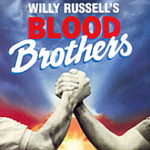 This is the musical story of two brothers ‘Edward’ and ‘Micky’ who are born on the same day, one who is kept, and one, given away. Their mother, ‘Mrs Johnston’ is too poor to keep them both, and knowing the trouble she will be in if she does, gives one to the desperately childless ‘Mrs Lyons’. As the boys grow up they become friends, despite the obvious class differences. In a dramatic conclusion to the story both of their lives are lost, fulfilling the prophecy that twins separated at birth must never learn they are a pair, for if they do they would both immediately die.

This piece directed by Max Rayner borrowed a lot of its staging and setting from the London show still running on the West End today. This may be a risky proposition. Anyone seeing the show again might be comparing it to the London production, undoubtedly staged on a much larger budget, but, nonetheless all of the elements in this amateur recreation are highly successful.

Narrating the story in the role with the same title is Scott Nell. Nell, recognised for his character acting ability and well known in Adelaide theatre circles, tackles this role with gusto. His voice is stunningly deep and eerie, his multiple roles as the ‘Milkman’, ‘Bus Conductor’ and ‘Teacher’ are light and humorous in comparison. The brothers played by Chris Buhagiar as ‘Mickey’ and Matthew Brooks as ‘Edward’ are decidedly different. Buhagiar gives strength and energy to ‘Mickey’ and maintains an excellent accent throughout all the dialogue, Brooks is more proper as ‘Edward’ with an educated tone and warm naivety. Both sing their roles well. Jenny Scarce-Tolley has the difficult role of ‘Mrs Lyons’. A myriad of emotions are experienced in this characters journey and Scarce-Tolley delivers them all - longing, desperation, anguish, agony, fear, hate and passion - with skill and élan

Michelle Nightingale as ‘Linda’ plays her characters age ranges with skill – from 7 years to 25 she never appears to be patronising or false in her interpretations of the characters tribulation. Angas Smith works very hard with ‘Sammy’ and gives a lot of energy, but as ‘Mr Lyons’ fails to convince us that he is a man of any strength or stature – though this may build throughout the run.
The show stopping performance however comes from Robyn Smith as ‘Mrs Johnston’. Smith is pitch perfect, resolute and skillful in her portrayal of the downtrodden mother with strength to raise a family in desperate times. Her performance is emotionally moving and powerful and it is little wonder half of the audience leaves the auditorium wiping a tear from their eyes. It is disappointing however that a projection of Marilyn Munroe images has been incorporated into her songs only serving as a distraction for the audience and continually breaking the emotional tension that begins to build throughout each of her numbers.

The ensemble also work very hard, the original production incorporates synthesizers over the voices and attempts were made at this with the lead characters, but a lack of microphones for the ensemble meant spoken words or sung lines were often lost behind the music. The orchestra, under Musical Director Emma Knights played excellently. The set was simple and effective and the costumes did the job, though some if the outfits were a little disappointing and didn’t point up enough of the differences between the upper classes and the poor.
Overall the piece seemed to lack a little bit of pace, but was, without a doubt, an excellent show and well worth a look.