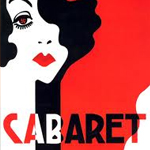 Clifford Bradshaw is an American writer struggling to unearth inspiration for his next book, and finds himself searching for it in Berlin. On his travels he meets an entertainer by the name of Sally Bowles, who performs in the local cabaret, the Kit Kat club. Our writer finds love with Sally, but the Nazi revolution is beginning to take hold and for their own safety and that of their unborn baby Cliff and Sally decide to return to America, but not before a few unexpected twists and interruptions.

This show is written to be a big, bold cabaret production, and while the cast work very hard and sustain good energy throughout; unfortunately the show doesn’t quite deliver. The production company has assembled a capable cast, but sadly some of the more flamboyant and talented characters voices are often lost as are much of the lyrics.

The choreography was strong, and Mel George and Rebecca Stanley should be congratulated for the overall look of the production. Popular numbers included ‘Don’t Tell Mama’, ‘Perfectly Marvelous’ and ‘Money’ but the show stopper had to be ‘Two ladies’ which had the audience in fits of laughter and received thunderous applause.

An energetic and vivacious performance from Jamie Richards as ‘Emcee’, but the performance of the night goes to Julie Quick as Fraulein Schneider, who, although a self confessed non-singer managed to entertain and excite the audience through all four of her numbers.

The set design by David Lampard was quite abstract, but fitted the mood of the play, and upon closer inspection had some very interesting links to the story line buried in its arrangement. Outstanding was the orchestra playing on the stage, and with the addition of microphones for the singers this would be a truly entertaining night of cabaret.