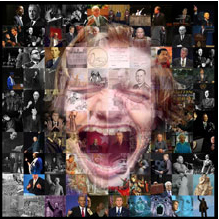 I’ve browsed through those books and have seen some footage of the great speeches (no, I don’t have a rare movie of Aristotle’s’ reply at the trial for his life, or Pericles’ grievance speech to the war widows and mothers, but you know what I mean).  Belgian theatre artist Valentijn Dhaenens’ interest in this was a lot more ardent.  After reading over 1000 speeches, he has collated some stirring stuff into this one-man tour de force.

The set comprises an array of microphones and a sort of chalkboard written with the great speakers and the year of their words that we will be treated to.  Dhaenens, of slight build and in a smart grey-green suit, physically swells and builds into each historical figure in a stunning transformation.  The vocal characterisations are absolutely incredible and there is a palpable sense of being in the presence of power and confidence.

Without narration, the audience is obliged to connect the dots.  Herr Goebbels is dovetailed with General George Patton in a call to arms.  The abdication of Belgian King Boudewijn in his moral protest against a pro-abortion bill is followed by Congo President’s Lumumba’s Independence Day speech, gloating over the liberation victory of arms against the Belgian colonists.  There is a cacophonic medley of 1960s great Americans, principally about race.  That was introduced by an amazing vocal mimicry of Hendrix-style guitar feedback.

Indeed, the speeches are frequently separated by live sampled self-harmonies further illustrating the power of voice and contextualizing the times.  The cool, icy voice of Osama Bin Laden, five years before 9/11, made you contemplate the American hegemony.

Bravo!  This is a don’t miss show.  Nearly getting a standing ovation on opening night, I was hoping he would do an encore of Churchill or Hitler, but that was not to be.  The hour-twenty went by in a flash.

When: 28 Feb to Mar 3
Where: Queen’s Theatre
Bookings: adeladiedefestival.com.au