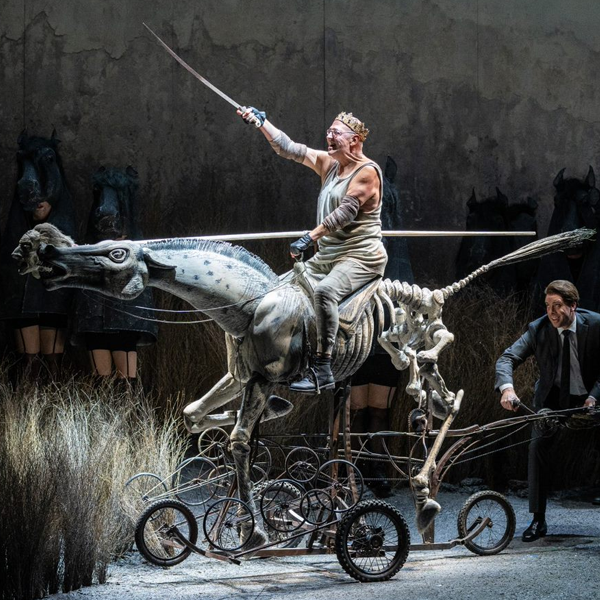 Art reflecting politics reflecting art. Russian composer Nikolai Rimsky-Korsakov became an activist while a professor at the St Petersburg Conservatory in solidarity with his students protesting the shooting of workers petitioning the Tsar in 1905. This callous act eventually led to the Russian Revolution and the end of the dynasty. Rimsky-Korsakov bases The Golden Cockerel on the same-named Pushkin tale of a decrepit Tsar - who is derelict in his national duties - and his disastrous border wars which eventually leads to his demise. Referencing current events, we can only hope so.

The indefatigable Melbourne-born Barrie Kosky directed the 1996 Adelaide Festival with its memorable Red Square late-night venue (another Russian reference). Current Adelaide Festival directors Rachel Healy and Neil Armfield have already brought us Kosky’s operas Saul and The Magic Flute since 2017, so there’s a lot of love for this hugely famous, accomplished and productive international director.

It's easy to see why. Kosky’s flamboyant approach to the creative reinvention of the operatic experience is visually far removed from the static divas and divoes of the Italian romantic tragedies. And there is a perfect match between Kosky’s imagination and the mythical elements of The Golden Cockerel. As Rachel Healy opines - drawing heavily from Mark Pullinger’s excellent review of 21 May 2021 in backtrack.com - with its “political satire, sardonic humour and surreal burlesque, The Golden Cockerel is an opera tailor-made for Barrie Kosky.” Kosky’s creations are like living a dream rich in aural and visual textures, a double-barreled sensual assault. He imagines for you.

Far removed from the formality of the palace, the action takes place on the Russian frontier close to the warfare in a hilly field of autumn-dried tussock grasses dominated by a single dead tree. Longing for leisure and weary of the constant enemies on the border, the Tsar surrenders his vigilance to a golden cockerel whose magic is in singing of impending danger. But the Tsar’s promise to the astrologer in return for the bird will be his undoing.

The Tsar is disheveled and unhinged, waving his sword aimlessly at imaginary foes. His sons are spoiled sharpies in suits and their feint love for their father and misdirection of the Tsar’s affairs holds elements of King Lear. We see the boys later, headless, hanging from the limbs of the lifeless tree in a grotesque Goya-esque reflection of the horrors of war. And the Tsar is now beguiled by an enchanting queen.

Pavlo Hunka (Tsar) and the graceful Venera Gimadieva (Queen) dominate the central portion of the opera in a lengthy arioso comprising a beautifully ethereal exchange of intentions. But their emotional commitment is faint. The Tsar is a twat – like an impotent adolescent in an alcohol haze - while the Queen is regal, elegant, seductive and secure. Whilst they maintain their symbolism - the Queen as a shimmering symbol of the mythical East dressed in the gold of the rising sun and the Tsar as a derisive object of political satire – an interpretation on a human level shows us a beautiful woman unedifyingly throwing herself at a sad older man. An understanding of the symbolism in the original tale and in Kosky’s re-awakening richly enhances the experience, as the aforementioned protest in 1905 was associated with Nicholas II’s defeat by the Japanese over Manchuria. Andrew Popov’s astrologer is a Chinese sage in European attire - his soaring tenor-altino is startling. Kosky mischievously broadens the definition of “East” by having Matthew Whittet’s fantastically unfeathered and high-heeled cockerel resemble a Hindi saddhu (discombobulatingly voiced over by Samantha Clarke).

Four fantastic dancers costumed like you’ve never seen before have the main function of livening things up. The Adelaide Festival Chorus is out in force, sometimes dressed like extras from Beetlejuice, sometimes it’s horses for chorus – over-large heads supported by lovely legs. Bravo! Kosky briefly employed a wonderfully detailed wheeled machine that delighted. Conductor Anthony Hunt leads the Adelaide Symphony Orchestra in another unreproachable performance. As Neil Armfield says, “If you’re transported by Rimsky-Korsakov’s Scheherazade or Flight of the Bumble Bee, you’ll fall in love with this richly melodic, kaleidoscopic work.”

Of course the whole is greater than the parts. Kosky sprinkles the theatre magic dust into your eyes and ears and you slip away from your worries into a sublime meditation. It’s the first staging of The Golden Cockerel in Australia and this might be your only shot at it.