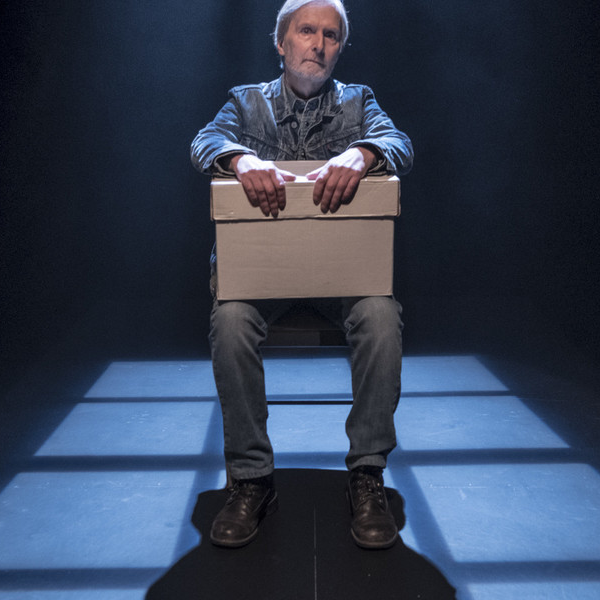 Creative director Martha Lott of Holden Street Theatres has innovated again. Using loot from the Holden Street Theatres’ Edinburgh Fringe Award, she has brought to Adelaide four 70-minute film renditions of theatrical productions emanating from Vancouver, Canada, that were first shown at the 2021 Edinburgh Fringe. In today’s Covid-compromised world, this is another way to see world-class theatre as it can’t always come here by Qantas. Lott makes the viewing experience a very comfortable one with widely spaced comfy chairs - and side tables for your dinner and drinks purchased on site - facing a wall-mounted screen in a lovely room of a Hindmarsh heritage home.

Recidivist Patrick Keating grew up in a nice Irish Catholic family in Montreal but was attracted to drugs and the tribe that comes with them before he was even a teenager. He served time in a great number of penitentiaries for serious drug and robbery offences culminating in the armed variety. On the stage, he is captured behind the bars of chiaroscuro lighting and appears diminutive in denim pants, shirt and jacket reminiscent of prison garb.

Canadian prisons are no picnic. Not being a tough guy, he shares several survival strategies. Sometimes, be like a cat – arch your back, get your fur up and hiss. Or make yourself a small target, be invisible – a technique he learned avoiding questions in public school. Or make yourself useful; do a few favours that will be remembered. Sometimes even good old empathy works. That was in. Out was no picnic either. Prison habits persisted, like washing your fork and spoon and putting them in your back pocket, and a suspicion of plain, friendly chit chat. The pathos was palpable. You see, he never talked about freedom, like he didn’t know what to do with it.

Keating took advantage of a prison program where he requested a transfer to another province where he knew nobody – in faraway British Columbia. It was awful to leave his tribe, but it led to a mentor and performance and the man we see today.

Keating’s forte is not acting but, ironically given his history, honesty, and since he wrote of his own life, it works. But his compelling and ironically funny anecdotes – told in his wonderful Montrealer Irish-Canadian accent – are not the whole story. You soon find yourself gazing into his piercing clear hazel eyes during the close ups speculating on how Keating’s life of revolving door incarceration shaped him. You begin to understand his wariness, his sizing up of people for their threat potential, or how to eek out some small comfort from harshness. He was repeatedly released untrained for life outside and each time he returned to what he knew. But he did progress from his drug community to his prison community and finally to his theatre community. “They have my back.”

Keating has an awesome capacity to bring you right along with him on his life’s journey, to have you accompany him into the cell and hear the door slam. This is an intimacy with someone whose crimes only paid in memories both poignant and malevolent.

The filmed theatre concept shapes up better than you may think too, as all four of the shows use edited footage from multiple camera angles, like a proper film. But you can’t see the whole stage at once - the camera does all the focusing for you. The nervy interaction between audience and performer is missing and you can’t talk to them after the show. But are these disadvantages enough to keep you at home? No way.

The other three shows of the On Screen Program are: 1 Hour Photo, do you want what I have got? A Craigslist Cantata, and The Darlings: A Provocative Evening of Drag from Vancouver.