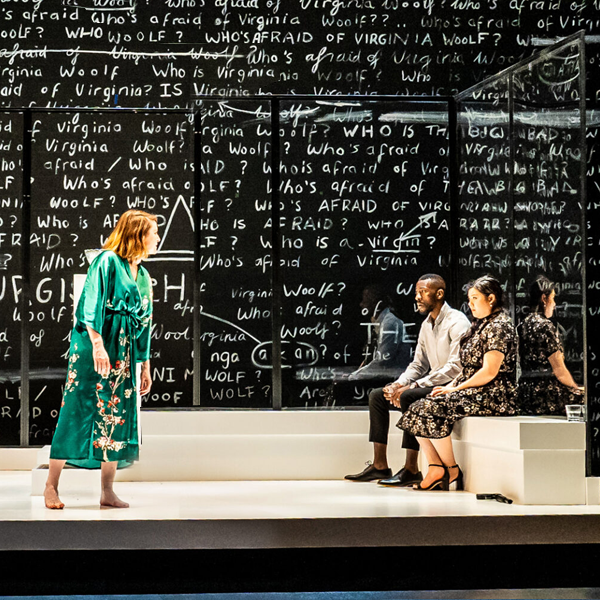 American Edward Albee’s Who’s Afraid of Virginia Woolf? was a hit from the get-go. Albee made his name with a confronting play of prejudice – The Zoo Story – in 1959, and Woolf was his first full-length play. It opened on Broadway in 1962, winning the best play gong in both the Tony awards and from the New York Drama Critics’ Circle. Woolf wowed them again as Mike Nichols’ 1966 movie starring Richard Burton, Elizabeth Taylor, George Segal and Sandy Dennis; unbelievably, Nichols’ directorial debut. The film was nominated for 13 Oscars and won five. In other words, a must-see play/film.

Must you see this production? Not so sure. George and Martha, married for 23 years, arrive home tipsy after a soiree at Daddy’s, Martha’s father, who is head of the Ivy League university where George teaches history. As Martha announces, that should be an advantage for George, but it is the cynical George who is now history. A younger academic new to the place, and his wife, are invited from the party for a nightcap. They are the perfect audience for George and Martha’s psychologically dangerous and bitchy games where marriage is theatre. And when they tire of driving each other to despair, the guests are fair game. The action is fueled by hard liquor and shrinking inhibitions.

Words and rhythms and subtext are paramount in conveying Albee’s powerful word play of snakes and ladders, but director Margaret Harvey has introduced so many additional theatrical elements that the medium becomes the message. Albee discourages any forelock-tugging one might have done in reverence of the dominant white culture of academia by opening up its underbelly, but Harvey actually defocusses the target with what she calls “colour-conscious casting.” While casting in film is still largely true to description, this has been given up long ago in theatre. I have seen a dozen productions of Ibsen without a single Norwegian, so what does it matter if the actors are whatever ethnicity? When someone is described as older, and they look younger, or narrow-hipped and they’re not, or 185 pounds and they’re obviously less, well, so be it. And colour-conscious is not the same as “colour blind.” Television star Jimi Bani as George plays a George who is obviously of Aboriginal heritage (the dance in the water was a clear signal), as much as African Rashidi Edward playing the younger Nick is African. They aren’t black men playing white men, they are playing black men true to themselves. That’s good and different, but it seems like difference for difference’s sake and why is it about race?

Set designer Ailsa Paterson eschewed the older house described in the play and presents a modern idiom. The performers are within a Perspex box, sort of like an aquarium, except the water is on the outside - say a terrarium for the evening’s blood sport. The poor acoustics and random reflections were annoying. Thankfully, these transparent walls were flown away long before the end of the play. The repeated writing of the play’s title on a never-ending and dominating blackboard was distracting. The moat was a more interesting invention and sometimes useful. The sexually charged scenes were hot! And not normally on display, so that was good.

Director Margaret Harvey puts up with, or directs, a lot of shouting which unfortunately suppresses the required nuance, and the battle between Martha and George seemed more like checkers than chess. There were some wonderful positions (legs up post-near-coitus dysphoria) and juxtapositions, and inventive imagining conveying the more conventional stage directions (eg – doors, doorbell, bathroom, bedroom). Sound designer/composer Andrew Howard’s subtle drumbeat synchronised one’s heart with the dramatic tension.

Margaret Harvey in her notes describes her reasons for factoring in multiple reflections on race, but the production doesn’t comment on race simply by saying it does. It still should be about George and Martha.