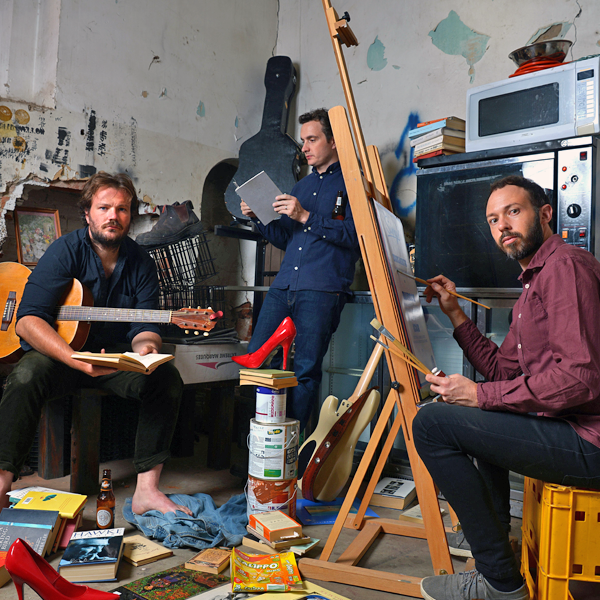 The poet who never lived simply cannot die. He continues to puzzle, disturb, and stir the creative juices. Following Stephen Orr’s extraordinary re-imagining of the Malley saga in his recently-published Wakefield Press Book, Sincerely Ethel Malley, Adelaide songwriter Max Savage emerges with an Ern-Malley cabaret show. Well, it is named as Ern: Australia’s Greatest Hoax and Savage avows a lifelong fascination with the Malley poems. He has said of his production, a result of the 2021 Frank Ford Commission, that it is a fresh take, his own take on the 1940s attempted duping of modernist poet and Angry Penguins editor Max Harris and with it an attack on the then burgeoning modernist movement in Australia (read more at ernmalley.net). And so it is. Audaciously so.

One must listen carefully for the threads linking to the hoax and they seem to come at the end of the concert, a concert which stands on its own as something loud and wild and different and often thrilling.

Max Savage is possessed of a dense and interesting gravelly voice, sometimes Dylan-esque and sometimes Tom Waits-like. His hands shiver and jerk beside him like a demonic Joe Cocker. There’s a bottle of red wine beside him on the stage and his throat is regularly lubricated as the show progresses.

The music is a rough amalgam of blues, folkrock, jazz, and electronic buzzsaw.

Savage’s brother, Ross McHenry is his collaborator on the music, much of which is riffed impro by a bunch of the city’s very best musicians.

Like all jam, it has its moments of high brilliance and its downs of self-indulgence. Sometimes the clarinet’s stridency is too persistent, cutting through the air; but, is it saying something? Is it telling of the pain inflicted by a malicious hoax? Perhaps. Ow.

The audience can only listen, wonder, and make individual interpretations. Perchance, many know little of the literary hoax, despite the display in the foyer. Many of them are well into the red wine, making trips out of the theatre to replenish their glasses, as if it was a pub gig.

Savage conducts the band between verses, prowling into the midst of the musicians, shouting and screaming, his mouth agape like an angry animal, or perhaps a giant Pacman, chomping at the smoky air. He revs the musicians into crescendos.

He is truly an original. What’s more, he is a good poet. His lyrics are profound and beautiful, often reiterated like verbal Philip Glass notes.

Of all the songs, his Ode to Kintore Avenue is closest to a tuneful evergreen with its ambling good rhythm. It is a poignant reflection on the boys who did not come home from World War II, notably, the two young Angry Penguins poets D.B. “Sam” Kerr and Paul Pfeiffer.

He does not use any lines from the Ern Malley poems.

In fact, he defies their content with strong references to God and salvation. Ern Malley was Godless.

Savage does, however, oft reference soldiers, reminding us that McAuley and Stewart, the hoaxer poets, were said to have been in their barracks, two bored young soldiers on a quest of malice when the hoax was perpetrated.

Savage gives them a serve, describing their hatred as “original sin”.

In an inspired nod to the Angry Penguins magazine wherein the Ern Malley poems were published, Savage has invited artist Josh Baldwin to create a large-scale work live on stage as an evolving backdrop to his performance. Angry Penguins celebrated the Modernist artists alongside the Modernist poets and novelists of the day, so this living aesthetic is an extremely enlightened inclusion.

Furthermore, it is just beautiful.  There are two performances of Ern in The Space and therefore two artworks will result. On opening night, Baldwin creates a sweeping landscape. Vivid blues shimmer as distant mountains and foreground rivers. An arid expanse of undulating ochre land is gradually dotted with stark little tree motifs and then, in an Olsen-esque gesture, a couple of lines of thrown paint streak across the canvas. Eventually, as the concert draws to a close, with signals between the singer and the painter, a horse and rider are added to the vista - and it is Don Quixote!  It deserves a standing ovation in its own right.

Savage and the band do, in fact, receive a loud ovation for the show, albeit also a stream of people quietly wandering off into the winter’s night wondering what had just happened.

What it was all about - a Max Savaging, a new era hoax, or just a flight of Ernest imaginings?

NOTE: Samela Harris, is daughter of Max Harris, the poet and Angry Penguins editor who was target of the Ern Malley hoax.