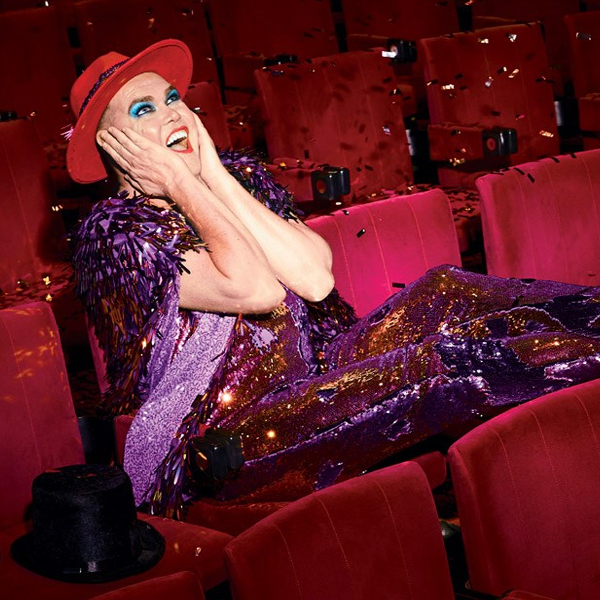 It might be Alan Cumming’s festival but the Gala was Hans' show.

Compere incomparable. He sang. He danced. He zoomed on wheels. He followed the script. He didn’t follow the script. He sparkled. He glittered. He cracked hearty and funny, with a pithy line in covid gags, to boot. And, oh my, did he have costume changes.

This 2021 Variety Gala may have set a record as the most epic of them all. It ran over by an exuberant hour or more.

Perchance director Mitchell Butel was having kittens backstage but the huge, masked audience was having a rowdy, happy ball of it - well, most of it.

First up, it was our new First-Nations rising star, Isaac Hannam, in Kaurna bling with a very special Welcome to Country, some marvellous virtuoso on the didgeridoo and an endearing comic turn. Immediately, good spirit was cast upon the show.

Interestingly, the biggest hit of the night is not even in the Festival. It was Gerry Connolly doing The Queen. Impeccably bewigged and costumed, he read the Queen’s speech to end them all, clever, daring, and rib-achingly funny.

Trevor Ashley did his Liza with a big voice and lusty lisp. Magician James Galea did some tricks and a song to take dick-happy humour to the edge of bad taste. Jan van de Stool brought the house down as the Dutch musical therapist interpretive dancer from BoyBoy or Woy Woy and stripped back her costume layers to do a comic take on Frozen. She’s a bit of a jewel, that one. And so is Steph Tisdell, a wickedly confronting First Nations feminist standup with the best Welcome-to-Country gag anyone has ever heard; love at first sight. Tutti’s Sisters of Invention, the world’s first disability girl band, put it out there in fine fettle and the audience clapped in time. Brendan Maclean did a potent number from the show, L’Hotel. The very versatile Michael Griffiths did some musical audience participation.  Hot from New Orleans, Amber Martin showed such a big, clear, piercing jazz voice that perchance they could hear her back in New Orleans.

Adelaide’s adored Willsy-of-the-sequins with her equally adored mate Bob Downe dared some “choreography” and a friendly song, prelude to their many nights of Adelaide Tonight in the Festival.

A few acts milked the moment a bit too long. Mama Alto, for instance, did an MGM production of attenuated vocal dexterity. Even the beloved 2021 CabFest icon, Paul Capsis took a Lennon song to dramatic extreme. Conversely, superstar Tim Minchin complained that had we wanted him sober, he should have been earlier in the program. He did a song about sex which rose to a super-duper Minchin crescendo and then sat down with a glass of wine before just disappearing back into the wings.

Hans, throughout, was coming and going and introducing and dancing and covering the show with a blanket of ebullience. It was fast and busy and busy and fast. Cabaret in overdrive. An audience in overload. There may have been more. It’s a big program.

And it certainly started with a blowout of pizazz.