The Government Inspector – by Nikolai Gogol 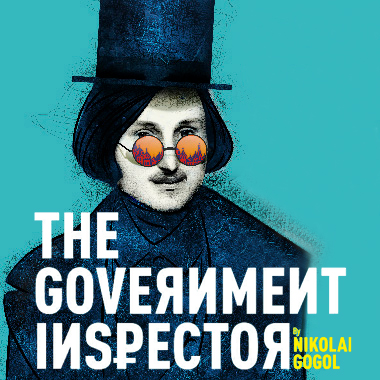 Thus is the Little Theatre dressed up in some colourful Russian-motif posters with lots of chairs, a table, and a crude bedroom setting on the mezzanine. Actors are clad in this and that, casual garb suggestive of their characters. They carry scripts but many of them seem to need no more than the odd glance. They are well prepared under the direction of Alexander Kirk who, most significantly with Lilia Nadyrshine, translated the five-act comedy from the Russian. While this critic has never experienced the play as a Russian speaker, the impression conveyed by this new translation is one of extreme perspicacity. The script is full of life, acerbic wit, and irony and the cast successfully imparts it for the most part. It is a huge cast, twenty or so, and some performances are uneven.  Where they are good, they are wonderful. Where they are not, they are endearing. So it’s a win-win of good spirit.

The play also is known as The Government Inspector or The Inspector General and, in performance since 1836, its plot is fairly familiar.  Rural township authorities go into over-the-top damage control when they believe that an inspector from the central government is in their midst to uncover their petty corruptions. They mistakenly target a nefarious visitor and the outcome is a mayhem of lies, vanities, bribery, and foolishness.

Of the swarming cast, Brian Knott is outstanding as the town governor. It’s a frenetic part but Knott’s skills and that superb voice rule the stage. Alejandra Arbe Montoya asserts a diabolically commanding presence and a good grasp of comic timing as his vain, vapid, bullying wife, while Camilla Wolf-Barry reels in the audience's sympathy with her embodiment of the wide-eyed and gullible teenage daughter.  Nicholas Elborough plays the mistaken identity visitor delivering mercurial mood changes and artful dodginess. Then there are the lesser roles which produce some delicious characterisations, notably Simon Lancione and Emma O’Connell-Doherty as the busybody landowners and April Slomiany is delectably devious as the sneaky postmaster. Worthy mentions include Philip Lineton, Jack Robins, Phil Grummet, Geoff Dawes, and John Rosen.

Clearly, it is hard to harness such a large cast for a long run, but this is a lovely, spirited and highly entertaining reading and it would have been good to see a longer season.

Where: The Little Theatre