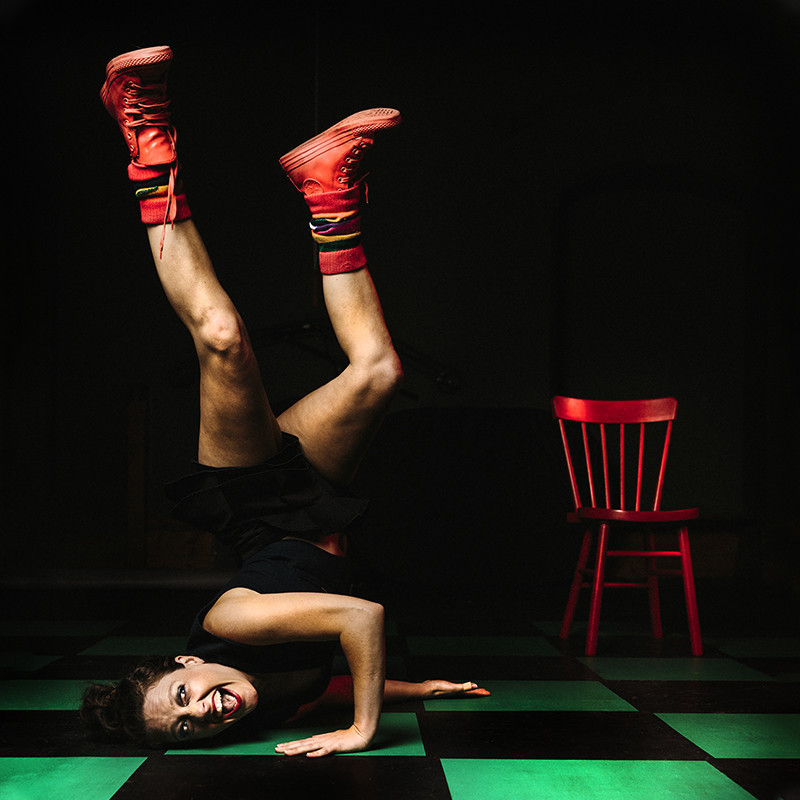 Devised and performed by Andi Snelling, and produced in association with award-winning Adelaide-based theatre company Under The Microscope, Happy-Go-Wrong is about facing one’s own mortality, surviving, and emerging intact but changed at the other end.

As one enters the theatre to the wistful (and, as it turns out, appropriate) strains of Bonjour sung by French singer-songwriter Philippe Katerine, we are subsumed into an other-worldly space. Clouds are visible through the pervasive mist and shards of light cut through and illuminate the playing area that is dominated by curious but imposing amorphous sculptures of twisted brown paper and first aid boxes. Evidently a story about a health emergency is about to unfold, and the French speakers in the audience may recall the lyrics “Je n’ai pas envie de crever” (I don’t want to die) from Bonjour.

Out of the mist Snelling materialises seemingly none-too-steady on roller skates and illuminating her way with a small torch. And there was light, and the antics begin! We soon learn that the performance is autobiographical and its essence is that Snelling suffered Lyme disease after being bitten by a tick, became dangerously ill, but survived. She tells the story of her journey to recovery through storytelling that borders on philosophical discourse, intelligent clowning, and choreographed movement that is expressive and synchronised with the cleverly devised underscore.

Throughout the performance she directly engages the audience, and this breaking of the so-called ‘fourth wall’ is fertile ground for her to not only play her live self, but to also play out what she imagines might become of her once she has slipped the bonds of this life. The whole thing very much keeps the audience on its toes, guessing and wondering what is unfolding before their eyes, and the hour passes very quickly.

Snelling is the consummate performer. Her stagecraft is well honed with first-rate timing. She relishes provoking the audience into a response, whether it be laughing at her antics, wincing at her blunt observations of the human condition, laughing at her insights into some of the absurdities of modern life, or being stunned into uncomfortable silence as she strips away the façades behind which we live (including all her clothing near the end of the show). Her use of the masses of twisted brown paper is genius. It becomes a physical metaphor for society’s choking bureaucratic response to life’s predicaments as she twists, turns and fights her way to overcome the writhing mass.

This show is provoking and unsettling in parts, but it is also an exciting, joyous and life-affirming romp that leaves a wide and persistent smile on your face.

Where: Mainstage at Bakehouse Theatre