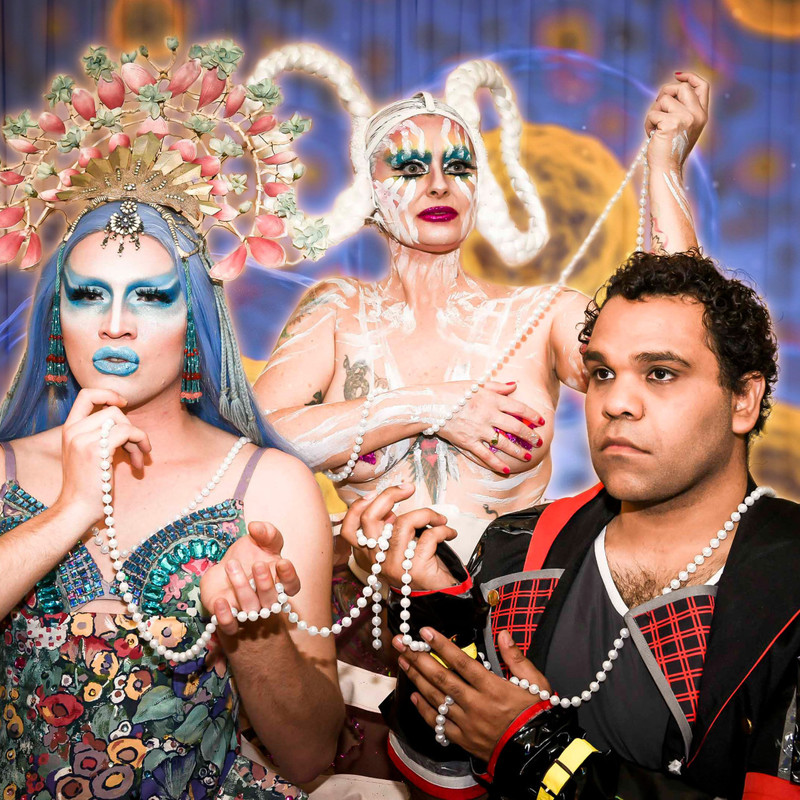 This confection called Slipstream from the Central Coast of NSW takes one back to the daring darling days of stream-of-consciousness, out-there, fanciful alternative performance art.  Naughty Noodle presents three performers doing three fairly extended idiosyncratic presentations which absolutely drip with creative juices. It's an experimental-storytelling fusion of art forms. Their themes are time, magic, genetics, and cellular memory. The earnestness and sincerity of the performers is almost overwhelming. Their reach for lyrical originality is deeply touching. And, they are definitely not without bundles of talent.

They have done the bravest and kindest of all Covid-era things, which is to mount an on-stage production for online viewing at home.

The 50-minute show opens with some interesting dance work around a clever, stretchy spiderweb after which  one Neville Williams Boney, a Wiraduri man, demonstrates the complexity of Aboriginal kinship lines using milk crates and bunting tape as illustration. He moves with the power and grace of a dancer and tells his story in clear, careful, and artful fragments. He is immensely likeable. Of the three pieces, his has highest traction for further development, which, one might hope, could feature rather more interesting music. While the nature soundscape is pleasing, his musical beat becomes densely, almost intolerably, repetitive.

Miss Tree arrives upon the stage with a keyboard. She is “a gender non-binary drag witch”. She wears a very long blue wig which seems hard to manage as does the gorgeous costume which she has to hitch constantly. These are small distractions to some wonderfully esoteric lyrics which she delivers in a very beautiful androgynous voice. Indeed, she is very beautiful, blue lips and all. Another interesting song is performed with guitar. Both are long, just a tad too long. But Miss Tree is someone to watch.

Completing the Naughty Noodle trio is the performer with the name to end all stage names: Glitta Supernova. Glitta performs bare breasted in an exotic costume of swinging hoops and, of all things, the Baby Elephant Walk is her principal dance music. She shimmies and bends and whirls and the colours projected on her and the curtain behind undulate and wave and it’s visually lots of fun. Again, it is a long solo piece. The monologue tells strands of family tales, relatives, sex clowns, and oh such bad women.

This sort of performance art is not everyone’s cup of tea. Brevity is not its forte. But, if one has any sense of original Fringe tradition, of the unknown companies stretching their wings and trying something new and out-there, this gender-fluid mob is today’s incarnation.