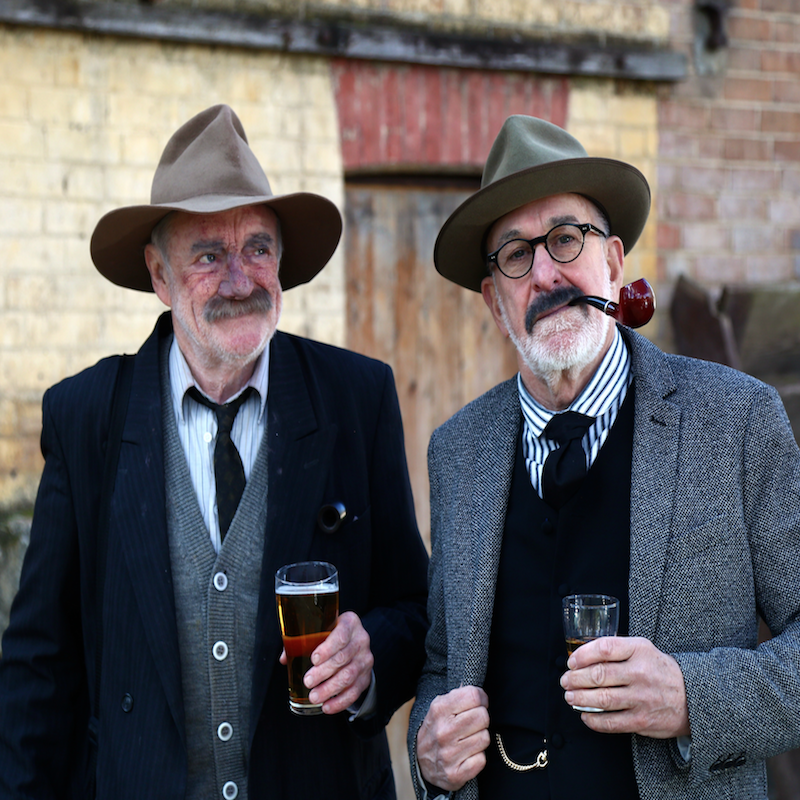 The War of Words between Andrew Barton ‘Banjo’ Patterson and Henry Archibald Hertzberg Lawson is infamous in Australian literary history. In 1892, through the pages of The Bulletin, they engaged in an extremely lively City versus Country poetic debate, and in this show the protagonists look back at the men they were then, and acknowledge a grudging respect for each other’s work.

The two men are catching up a century or so later, at the Leviticus Bar & Grill at Heaven’s Gate. Lawson is late (as per usual, apparently), and immediately the differences between the grammar school educated law clerk and journalist, Paterson and the republican socialist, Lawson were apparent.

Warren Fahey and Max Cullen have been touring Dead Men Talking since 2014 and have these characters down pat, while the characterisations are a little exaggerated, they work in this context. The relatively unscripted nature of the show sometimes leaves a gap, but they move smoothly on, familiar with all the works they need to mention.

Both give potted histories of their lives, and while Paterson refers early to Waltzing Matilda, he doesn’t recite the iconic poem until the end, and even then it’s an unfamiliar mixture of what sounded like English and pidgin, although it’s described as Aboriginal (much like Frying Pan’s Theology).

Lawson makes no bones about his alcoholism and mental health issues, and even if he wanted to downplay this aspect of his life, Paterson makes clear that this needs to be faced as part of his legacy.

The repartee is not as entertaining as one might have expected; two such remarkable wordsmiths should have had a more interesting and stimulating wordplay rather than the ‘dad’ jokes and puns that featured, but perhaps they preferred to let the poems and songs themselves do the talking. Fahey has a fair singing voice and sang/recited some crowd favourites (The Man from Ironbark, A Bushman’s Song), while Cullen’s recital of Faces in the Street was a highlight. Paterson’s response to Lawson In Defence of the Bush seems to have the effect of making Lawson’s original works stronger.

For those who have never read the works of these two remarkable writers, or who just know the very familiar poems, this production will introduce, in a very gentle way, some of the works of two of Australia’s most revered writers.