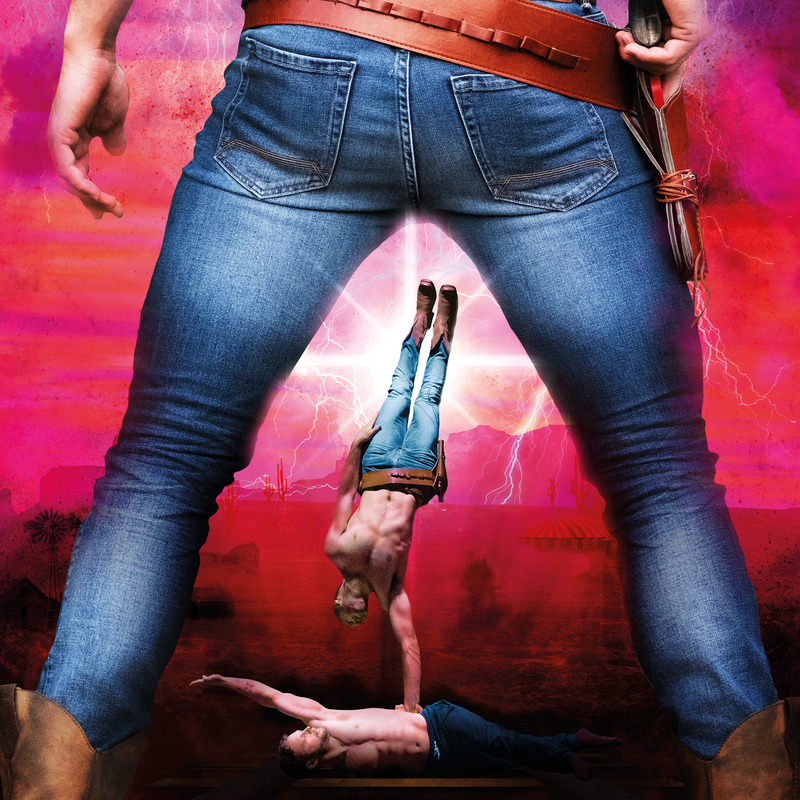 Railed is a western-themed physical theatre/circus romp performed by the highly polished Melbourne-based company Head First Acrobats. They have other events in this year’s Adelaide Fringe, but this one has a narrative, which makes it all the more enjoyable. Of course the eye-boggling acrobatic feats are all important, but having a story line – even an improbable one that is hyper-charged with plain funny sexual innuendo – gives the whole thing some coherence.

But it pays not to overthink these things and just sit back and let the whole entertaining experience swallow you up.

The troupe of four – Cal Harris, Harley Timmermans, Thomas Gorham, and Adam McMahon – play four bank robbing bandits and loudly burst onto the Octagon stage straddling (or is that mounting?) hobby horses. They brazenly flash their stolen loot (from the Bank of Railed, of course) and proceed to revel at the bar. And then follows a rapidly unfolding series of tricks, acrobatic and circus stunts that get progressively more extreme as alcohol fuels their bravado. Fifty minutes flies by and feels like fifteen – this is high energy and hilarious stuff!

Harris makes light of precariously balancing on five stacked chairs, and his balance routine on an unsupported ladder is an absolute highlight, as is Gorehams’s accompanying comedy routines. Harris’s banter throughout the performance – some of it deliberately sotto voce – is resolutely tongue in cheek and deliberately titillating. It too is a highlight that makes this event stand out from others.

Timmermans routine on aerial straps is a mesmerising display of strength, balance, grace and daring. His routine on the Cyr wheel has everyone’s jaw truly dropped!

Perhaps the absolute standout routine in the show involves two of the cowboys exchanging their traditional hats for a horse and a unicorn mask (?!) and participating in playful tomfoolery until their bromance takes on a new level. No spoiler here. Suffice to say alcohol fuelled testosterone leaves them gagging!

Hats off to Head First Acrobats! If you want to take in a circus event that is inoffensively laced with risqué humour, and you aren’t sure which way to turn, then get Railed!