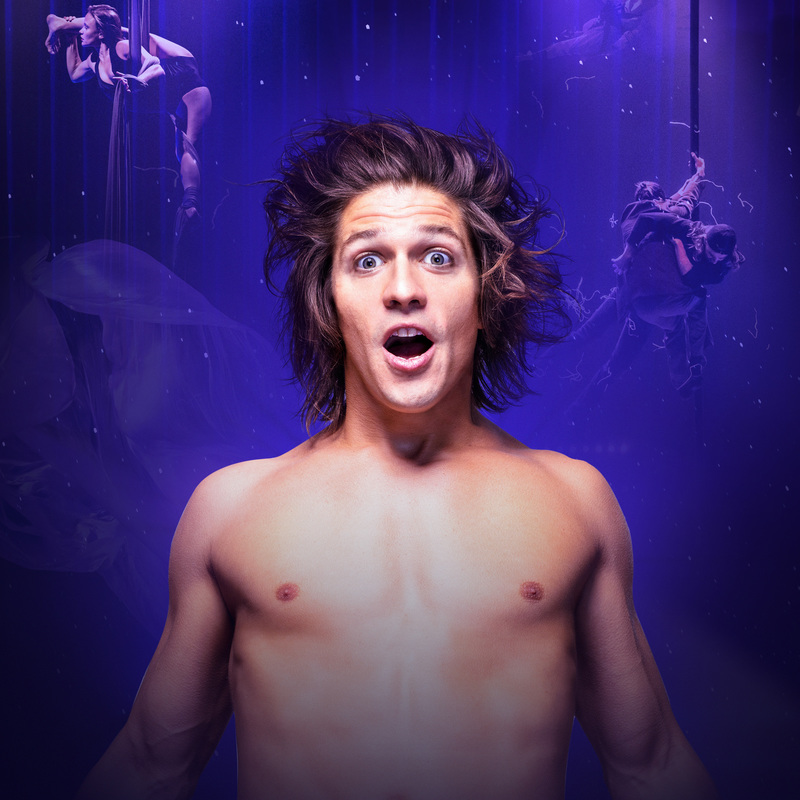 Adelaide Fringe. The Factory at The Garden of Unearthly Delights. 20 Feb 2020

L.I.A.R. (Life Is A Rehearsal) is a standout! If you appreciate comedy, dance, gymnastics, music, special effects, drama, physical theatre, and sexy bodies all rolled into one, then this show is for you. It is a must see event at this year’s Adelaide Fringe!

L.I.A.R. is a story about a boy growing up. The central character is played by Berlin-based gymnast/actor/comedian/performer, Remi Martin (it’s difficult to categorise him!). And what does Martin want to be when he grows up? An astronaut of course! The performance begins with him being born (!) as he emerges from a large blood-red luminous sac dressed only in very revealing briefs and clutching onto a toy astronaut. Martin’s body is tight, toned and terrific – beautifully proportioned like a classic Greek sculpture – and through delightful use of his body and a range of gestures and props, we see him develop through boyhood to manhood. Witnessing him changing clothes from short to long pants without using his hands is oh-so-funny and mind bogglingly clever!

Martin is joined on stage by two co-stars who are initially ‘roadies’ but gradually take on more important roles as they become foils to Martin’s increasing maturity. Mandi Orozco is a trapeze artist and a contortionist. She too is trim and terrific, and superbly plays the hard-to-win-over love interest for the developing Martin. Acrobat Tom Ball provides a lot of comedic interest in the entire production: his gormless looks and deliciously slap-stick antics are reminiscent of Laurel and Hardy and have the audience in stitches of laughter.

The entire performance is underpinned by a superb soundscape created on-stage by musician Tarran the Tailor, who expertly controls a range of pre-recorded sounds, effects and music, as well as singing and performing live on banjo and accordion with accomplished panache and style.

As the show progresses, and Martin confronts more and more of the harsh realities of adulthood, the cast’s circus feats become even more spectacular and visually dazzling. There’s an office scene, which incidentally is played half way up a vertical pole (of course?!), that becomes the epicentre of a hurricane which then morphs into a fight for survival on a storm ripped ocean. The lighting effects are simple but incredibly effective, and the sound scape forces you to the edge of your seat. This is dramatic stuff. At one stage wannabe astronaut Martin becomes Major Tom and floats through empty space as the sounds of David Bowie’s Space Oddity earnestly fill the venue.

And there is so much more. Did I mention dancing on skateboards, an accident with a piano, and a boy’s fascination with his genitals (oh so funny!)? These are have-to-see antics!

L.I.A.R. starts relatively sedately and, even though it is frequently hilarious, it builds to a visual and aural splendour. Life is not a rehearsal. Martin and crew give it their all, and this show – this experience – is simply not to be missed.

Where: The Factory at The Garden of Unearthly Delights