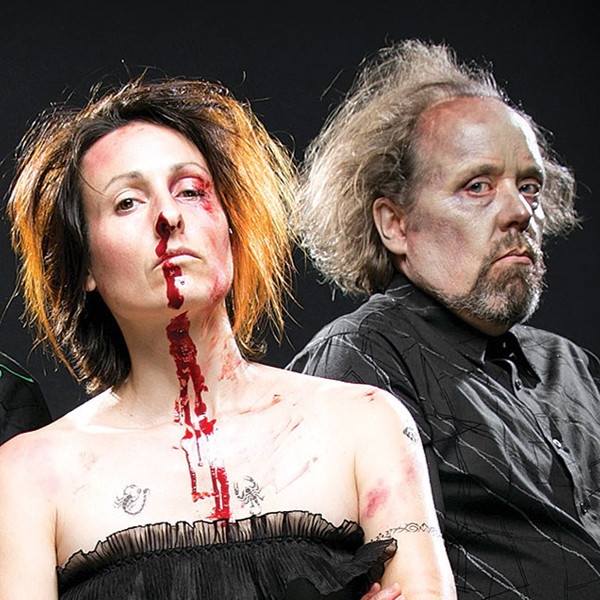 It’s not the famous movie. It’s a strange Melbourne confection of dark matter. Something spooky is going down, they say, having tip-toed into the room with their hooded heads illuminated by torchlight.

It’s the cabaret creep show, definitely R-rated with a wealth of profanity-adorned sexual and sinister content. It’s just a bit on the could-be-shocking side, but it takes more than weird psycho-pathology to shock an Adelaide audience. We simply like or don’t like. In the case of Suburban Gothic it comes right down the middle. At one moment from the three skilled entertainers, Mark Jones, Aurora Kurth, and Karlis Zaid, it is universal humour, as in the song about getting lost trying to visit friends in those confounded mazes of developer estates. Then, it is the overkill song about seven dildos at the side of the road which is having a go at consumer society and then ends up with a rather violent snipe at employers enjoying staff redundancy.

Perhaps the length of the songs is what drives them over the edge. It’s hard to find a snappy ending. The song about going down in an air crash is so ghastly, I would exhort flying-phobic people just to stay right away. It is a cruel song.

Albeit beautifully done, the dying disabled child number is tough and similarly, the domestic violence song. Brilliant but awful.

Piece de resistance is perhaps the flasher song which tries hard to give flashers some status as performance artistes and sends it all up deliciously. A winner. And thus, with these splendid performers and excellent backing, does this work directed by ex Tripod Steven Gates, make for 70 minutes of off-the-wall fearless weirdness.