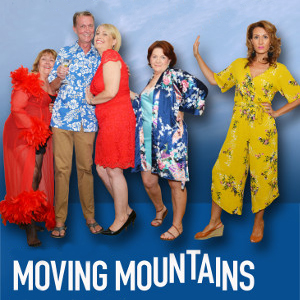 Galleon's Moving Mountains is reliable farce. It delivers on the laughs and there is much coming and going through doors. In the hands of director Erik Strauts, and his cast of players, it makes for a very enjoyable evening out at the theatre.

Charlie Fuller is all about moving mountains; particularly when it comes to the ladies in his retirement village. Charlie has “arrangements” with many of the women, and a reputation to boot, but when this friend-with-benefits falls in love, everything starts to unravel. Andrew Clark’s Charlie is charming and affable. The show hinges on his performance, and Clark carries the cast of crazy characters through the highs and lows with impressive energy. Lindy LeCornu and Kathy Strauts as Charlie’s lovers Gwen and Harriet, don’t get a lot of opportunity for character development but they absolutely bring the laughs.

When Charlie’s daughter Elaine, played by Sharon Pitardi, shows up the stakes are really raised. The paternal relationship between Pitardi and Clark is initially hard to buy as the two seem closer in age than father and daughter. However their performance overcomes this quickly.

Elaine is eagerly followed by her hotfooted wannabe lover Robert, who is also her and her husbands stock broker – with a wife of his own! Theirs is all the worst aspects of relationships set in stark contrast with the burgeoning love of Charlie’s life. Josh Van’t Padje embodies Robert with a nerdy energy that fits, but feels a tad desperate in the shadow of Pitardi’s constant rejection.

But it is when Polly Adamson moves into the village that Charlie becomes besotted. Robert is her son and, in a sly move on his part, he aims to see more of Elaine whilst visiting his own dear mother. Polly is a shy widower, and Charlie sees his opportunity to “move her mountains” and gets straight to work. Shelley Hampton delivers the naïve Polly at first with timidity, but she soon comes out of her shell.

One might think this farce replete but enter Adrian Heness as Marc, Polly’s young nephew, and sparks really fly. Marc is in love with an evasive woman and seeks Charlie’s help to successfully court her. Charlie’s advice is, of course, sage and (spoiler alert) when her discovers that the object of Marc’s affection is his own, Polly, the wheels completely fall off. Heness’s Marc is honest and one never fails to believe he is captivated by the much older Polly.

The whole cast come and go from Charlie’s apartment – well designed by Brittany Daw and lit by Luke Budgen – in a cavalcade of emotion and the result is laugh-out-loud fun. Worth a look.