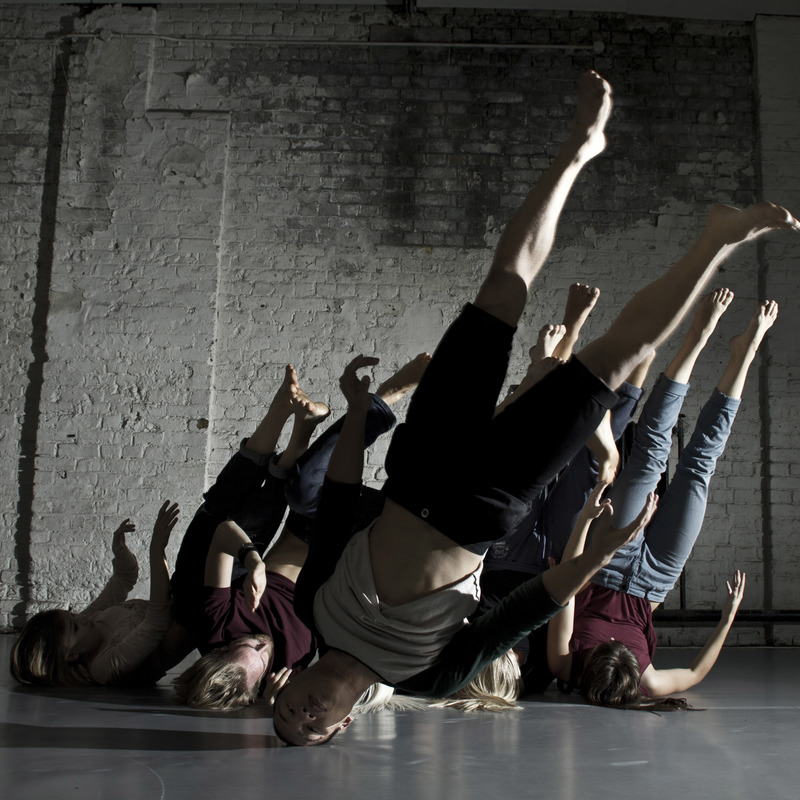 The tone of the evening’s collected works is gently set in an overture, The Law of Least Effort (Tension). Carlie Angel sits in lotus position, in calm head bowed meditation, above her hangs suspended by rope-net a very large boulder.

There is peace in the moment, as the audience silently contemplates tension between the boulder and an at peace human. There is no urge for something to ‘happen’, because in the still silence, something is ‘happening’. Peace is being wonderfully expressed on stage, one can feel it being shared in the audience.

Talitha Maslin’s Mini Oper.1 gains its power from what is omitted, much as what is included in her passionate, raw and concise exploration of the idealistic, crushing standards of classical ballet and opera.

Maslin dances ragged excerpts from classics such as Swan Lake in a black dress with strategically placed cuts, sans pointe shoes, and in pained duress. It does much to deconstruct the classical style beauty myth. No gliding princess here. Just raw bare, stressed feet working overtime.

Here is a desperate pretty trying to live up to the song bird diva princess standard, and being crushed by reality in the attempt. A microphone stand with no microphone and sound leads disconnected on the floor adds further pressure to ‘be big’, all supported by Dane Yates’ equally classical/strident sound score.

Welk’s series of phrases, expressing a long number of subjects, is richly suggestive; not prescriptive. His choreography is so utterly mesmerising in its taut, unhurried shift from moment to moment, it matters not the ‘meaning’ or ‘subject’.

Here is play on an audience’s subconscious at its most effective.

Natalie Allen’s Climacteric is an intense expression of a ‘critical moment’. Birth/Death. Her repeated phrases of rise and decline are strong and clear with great impact, softened wondrously by a phrase in which she walks, hands up stretched, slowly releasing a steady trail of very small white balls.

Lewis Major’s choreography for The Australian Dance Theatre Youth Ensemble’s Two Pieces (excerpts) proves perfect material for the 15 member ensemble to offer a strong, engaging performance of contemporary moves in precision ensemble dance. Using chairs and mixed formations, it challenges them to deliver what they have within them with the fullest of their expressive capability.

Choreographer Pascal Marty and dancer Carlie Angel’s The Law of Karma (Day 1) plays with a physical expression of ‘karma’ using a whip.

It’s an audacious and, literally, cutting work. Smooth, powerful, fearless and dominating all at once.

While Angel may control the whip in motion, the whip’s innately dangerous ‘nature’ sets the boundaries of use, sets consequences for a wrong turn of wrist or body as the whip flies in glorious whirls, cutting snaps and sharp whispers in the air.

It is beautiful to watch. It’s also worrying as Angel’s circular relationship of interplay with the whip moves from being at one with it, to working warily against its capacity to strike like a viper.

The piece is very obviously exploring a deep, disturbed, questing, mental and emotional interior, effectively cued by Mollison’s stark side lighting which creates an eerie otherworldly setting; a table with chair set on top of it.

Bradley’s choreography is magnificent in its considered, deft, edginess as his character explores, seeks around the table, the chair and now unbound of his seemingly ordinary coat and trousers is even more a figure of an inner imagination than ever.

An intense, gripping finale to a genuine, only-at-the-Fringe evening.

Where: The Odeon, Norwood