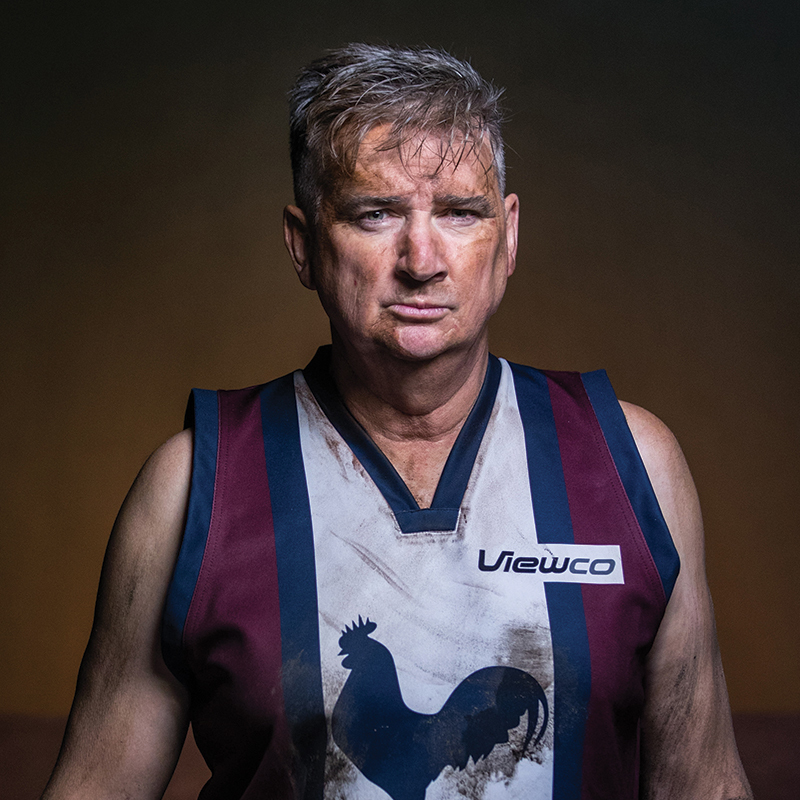 I have seen Melbourne comedian/actor/writer Damian Callinan in two previous shows of his own creation – The Wine Bluffs and Damian Callinan in The Lost WWI Diary; they were both terrific. The Merger began life in 2010 and is through the posts for six in becoming a motion picture in 2018 with Callinan in a starring role in his own screenplay.

Appearing first as the coach of the disastrous footy team of a clapped-out timber town called Bodgy Creek, giving the audience a half time pep talk, Callinan garners information from the audience that gets shelved for later hilarity. We learn that although the Roosters won six premierships, but none since 1994, they have excelled in winning environmental awards and in new age education. But that doesn’t win footy games. Faced with annihilation and a merger with their rivals, they bring in government subsidy and new players through a refugee rural re-settlement program. The food improves, a minaret is added to the scoreboard, and prayer rooms compete with the pubs. A most pertinent and heart-warming tale of a different kind of merger.

Callinan’s clever writing is deliciously indirect in getting to the point of each scene. It rambles about until an ‘Aha!’ moment. His comic timing is precise, facial expressions uncanny and the detail funny, funny, funny. Humorous voice characterizations and body language distinguish a plethora of personae. The satire on small town-ness is side-splitting but by third quarter time in the story, when the refugees arrive, there is also significant emotional substance. In the fourth quarter, one was all of laughing at the antics, cheering on the refugee project, moved by the poignancy of the grateful new immigrants, and weeping over the setbacks, sometimes all at the same time. Oh, what a world we could have!

Do the Roosters win the Grand Final? Go see for yourself. Double bravo for writing and performing!

Where: Holden Street Theatres – The Studio, and Stirling Fringe – The Parlour