The Mastersingers Of Nuremberg, Act III 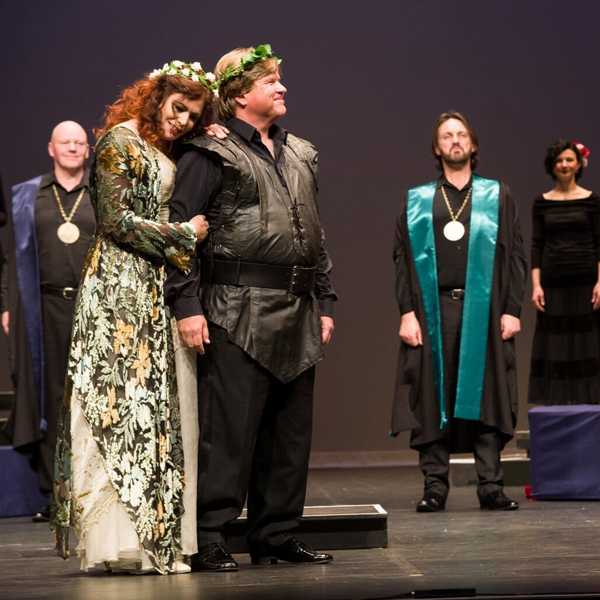 Performing anything for one night only is a big ask of any company, and a once-off performance of an opera is an even a bigger ask. When that opera is one of Richard Wagner’s, then the whole undertaking is almost mind-numbingly bizarre, but that is precisely what the State Opera of South Australia has done, and like the curate’s egg, the result has its good bits and its not-so-good bits.

The Mastersingers of Nuremberg is one of the longest operas ever written, and is almost certainly the longest in the current repertoire. It comes in at about four hours twenty minutes – not including interval breaks – but State chose to perform only Act III, which is close to two hours long. The whole thing is a brute, and can easily try the endurance of even the most stoic opera-goer. However, it’s a comedy (of sorts) which partially dulls the barb that is its enormity.

Choosing to perform only Act III however proves to be a weakness in the production. All the unfolding of character development that we might have witnessed had we seen the entire opera is of course absent, and, in his own words, director Andrew Sinclair was compelled to “concentrate on the stronger issues of romance, humanity and the importance of art” to the exclusion of almost everything else. If one does not know the plot sufficiently well, then the minor characters come across as two dimensional and relatively shallow and the principals’ fare marginally better. The drama is muted and understated except where emotions are in plain sight. Being a ‘semi-staged’ performance, the sets, scenery, properties, costumes and lighting are minimalist – almost sparse. This of course requires the audience to fill in all the gaps themselves, which is arguably unfair. Grand opera is, after all, meant to be grand. It’s why we go, and Wagner is a master of the artform demanding that all production elements come together in such a way that the whole exceeds by far the sum of the individual parts.

But, there is the music and the singing, and that almost puts every other misgiving to the sword.

Wagner’s score is rich and exquisitely embroidered. Every sentence of the libretto is set to its own deliberate musical schema, and conductor Nicholas Braithwaite draws the very best out of the mighty Adelaide Symphony Orchestra.

Shane Lowrencev is stately and dignified in the pivotal role of Hans Sachs, and overcomes Sinclair’s almost absurd direction that requires him to sit at a desk almost motionless for the full six-minute duration of the prelude at the beginning.   That inactivity cast the mould for his characterisation for the rest of the opera: patient, stoic, and accepting. Bradley Daley sings Walther von Stolzing beautifully. He brings lightness, grace and assuredness to the role, and it is one of the best vocal performances one has seen from him. Kate Ladner’s characterisation of Eva is restrained but her fine vocal line sails over the orchestra whenever it is needed to do so, as did Fiona McArdle’s Magdalene. Sam Sakker is animated as David and, pleasingly, he is instantly believable. His acting performance is one of the evening’s highlights.

The minor characters are played by Robert Macfarlane, Hew Wagner (who had the most expressive and animated face on stage of the entire company – he is so interesting to watch), Adam Goodburn, Andrew Turner, John Bolton Wood, Pelham Andrews, Jeremy Tatchell, Joshua Rowe, Daniel Goodburn and Robert England.

And then there is Andrew Shore in the role of Sixtus Beckmesser. His performance is an object lesson in how to breathe life into a character. His opening scene is hilarious, very welcome hilarity, in which he perfectly synchronises movement and music with the one magnifying the other. Presumably Sinclair had something to do with this, and the whole production would have benefitted from more of this penetrating direction.

The chorus of the State Opera is again wonderful, and the procession of the Guilds is a triumph vocally. Chorus master Simon Kenway extracts the very best from the large chorus. The clarity is exemplary.

The visuals of the procession are however lacking – much more colour and chorography and lighting effects are sorely needed, as they were elsewhere in the production. But, in Sinclair’s words, this is a semi-staged production, and corners are cut, presumably for budgetary reasons. One would have much preferred a Wagner gala evening along similar lines to previous Puccini and Verdi galas, but, based on the ecstatic audience reaction and their generous applause throughout a curtain call that was almost endless, one is clearly in a minority.