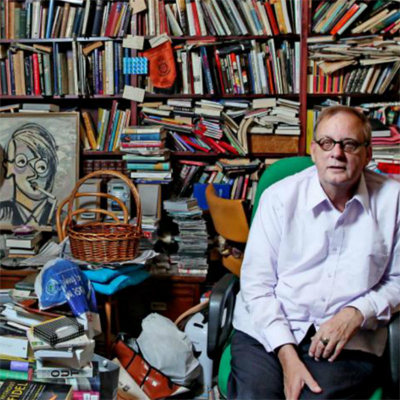 Herr Goërs is back at Holden Street with his third Fringe show of self-proclaimed "crap." Like Actors, Drunks And Babies Never Hurt Themselves and Smoked Ham, ...Hard Rubbish draws on his considerable experience as an inveterate theatre watcher, theatre producer and director, movie and theatre reviewer, and more lately, world traveller and ABC radio personality. What comes with the radio work is his absolute dedication to his regional SA and Broken Hill audiences. He would do a 400 km round day trip to open a cake sale in Jamestown. I used to hear his stories for free at parties. Now I have to pay for the pleasure at one of these shows, or otherwise drive to Oodnadatta or Coober Pedy to watch him judge a talent contest or open a renovated institute.

Peter was always a wonderful raconteur in his inner circle, so it's great that he has weaponised his wit for a live and loyal audience, many of whom desire to put a face to the radio voice. Advertised as for old people (unflatteringly, I think he means anyone over 50), he really connects with the modern niggles - like why are people throwing out perfectly good chairs and buying Ikea - and nostalgia - lamenting the disappearance of drive-ins and double-cut roles. He has an uncanny ability to link subjects or to return to them with humorous effect (a technique known in the business as shelving). There is much to draw on from his visits to the regions, like his great observations of the sticky taped history found on the walls of town halls and institutes, and anecdotes of people and incidents which he made compelling. All the local references make it seem you are in on something. I found that he was more revealing about himself in this show than the first, with references to his personal peccadilloes - "When workplaces became smoke-free, I quit work" - and his long stay in Turkey, which was a touchstone in his life. Like most of the audience, I was laughing when not smiling and thoroughly entertained.

He nearly ended the show with a story about Patrick White's Netherwood, saying that the play stops when all the characters are shot dead by police, thus ending the tedious proceedings. He said, "Wouldn't it be great if that happened in more shows?" Then a shot rang out and Peter feinted mortality to complete the joke. Unfortunately, the shot missed Herr Goërs and the show did go on, partly with material recycled from previous shows (eg the Ethel Merman joke) for which he apologised in advance. The shot would have been a good time to stop, like he said.

A thoroughly enjoyable time with the dinner guest you would love to have liven things up. And his ...Hard Rubbish is indeed "reasonably priced compared with a lot of other crap."

PS There is some funny business with his pal, Willsy.