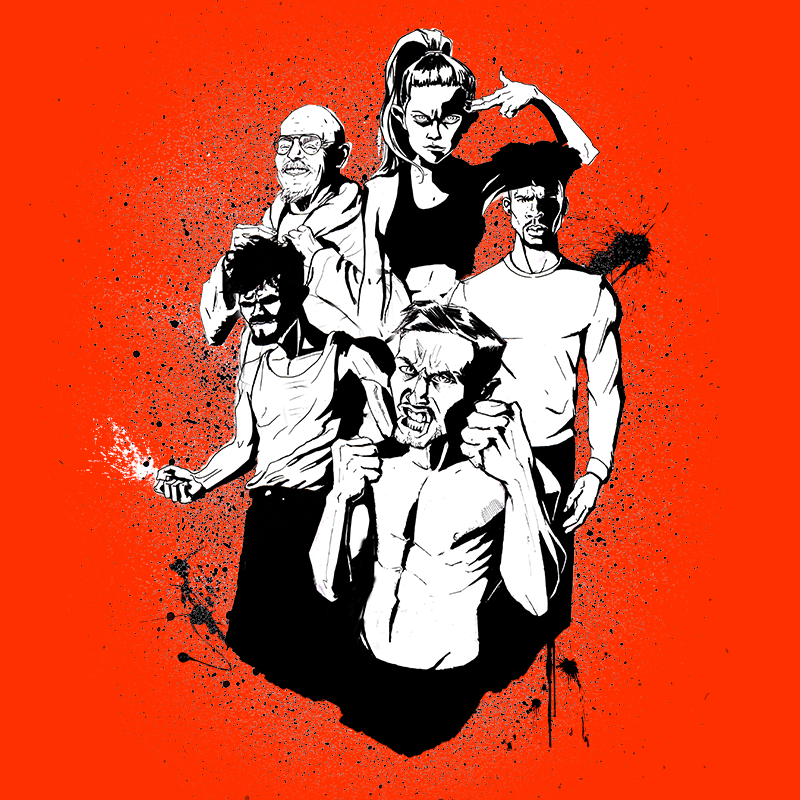 Behind the decaying concrete walls of those hideous London tower blocks, there’s thwarted lowlife festering in cramped quarters. Life is tough. The people are tougher. Or so their facades must make the world think.

They’re muscly and aggro Cockneys . They pick fights in the pub and never have enough dosh. They’re strutting, angry and bent on crime. This world as depicted in Elliot Warren's play Flesh and Bone is latter day Kray Brothers territory albeit that only Terry is the thug. Brother Reiss is gay and afraid to come out to Terry. Girlfriend Kel is hard-bitten and crass. She works the phone sex lines for cash. Granddad is a squalid old loser in his dressing gown, a nasty old thing. They’re all rather nasty. They are loud and vulgar. And, of course, so is the play.

It is high-energy and bellowing high volume.

But the message this new and award-winning play is conveying is that urban lowlife is just as much a timeless constant in poor communities as are the rats that share their slums.

Warren elevates this sense by alternating the play’s torrents of profanity with Shakespearean eloquence.

Most strikingly of all, betwixt and between the choreographed violence and domestic vulgarity, he gives each character a mighty soliloquy.

Therein, Alessandro Babalola playing Jamal, the huge black neighbour, presents a couple of performance vignettes of breathtaking power and beauty. Showstoppers. Here is a magnificent actor working with a terrific piece of scripting. As the stereotypically intimidating chip-on-the-shoulder criminal, he unveils a depth of vulnerability and innocence which is as beautiful as it is deeply moving. For this actor’s performance alone, Flesh and Bone is a must for serious theatre goers.

The rest of the cast also is adept and powerful and, throughout this play, right in your face. “In your face” is the description from many audience members. Olivia Brady as Kel looks a bit like a new gen Lulu and, indeed, has a lot of the heart and edge of that beloved English star. Kel is the classic used female in a male domain. It is such a coarse household, but she holds her own in the cup of tea territory and, with a cute bedroom sex scene, shows that in there somewhere there is a kernel of love with the rough and tough Terry, played to the cunning Cockney hilt by the playwright. The yearnings of the gay brother are classic and perfectly expressed in the performance of Michael Jinks. As for Grandad, played by Nick T. Frost, he is the product of a life of hard core underworld. He makes us shudder.

It is not entirely new to assert that even the lousiest hoodlums have hearts and hopes beneath their crude and cruddy lifestyles. But the way in which Warren has used the language in its highest and lowest forms gives this idea a potent foundation and this work a brave originality.