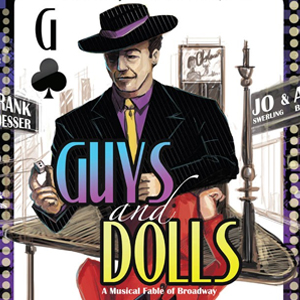 The magic of theatre. When it happens, when one realises that, within the big black box, one has become part of one great big single organism bonded in the shared pleasure of the moment, it is profoundly good. It is what theatre is all about.

This sensation was extraordinarily intense on the opening night of the Gilbert and Sullivan Society's production of Guys and Dolls. The audience responded to the performance like a big beating heart, responsive to each nuance.

G&S has an excellent reputation for mounting lots of slick and professional musicals, especially the light opera of its eponymous composers. But this show in The Arts Theatre steps it up a Broadway notch.

The teamwork between director Karen Sheldon, choreographer Kerry Hauber, and musical director Martin Cheney reflects both understanding and generosity of spirit as well as expertise. Interestingly, all three have honed skills with Northern Light Theatre Company.

Of course, Guys and Dolls is one of the great musicals of all time. Based on a Damon Runyon story scripted by Jo Swerling and Abe Burrows, it is rich in classic characters, love and fun, humour and satire, absurdity and redemption, all gift-wrapped in Frank Loesser's score of evergreen hits.

The director says her first participation in Guys and Dolls was a catalyst to her making theatre her life path and it is still her favourite show. This shows. But, of course, you can't make a hit production without some pretty talented performers. Sheldon has found a full complement. Her principals are stunning. Then again, any show that his Nicholas Bishop in a minor role has to have a creamy cast. Bishop plays the constantly-snacking gambler Nicely Nicely Johnson and when he sings Sit Down You're Rocking the Boat, it is nothing less than a wild show-stopper.  The audience applauds and hollers itself into exhaustion.

Jason Bensen is the official star of the show, playing the inveterate gambler Sky Masterson who accepts a bet that he can convince a Salvation Army girl to go on a date to Cuba with him. Bensen is suave and handsome with good acting skills and a voice which can carry the Sinatra-famous songs such as I've Never Been in Love Before, albeit that no-one can actually match Old Blue Eyes. What Bensen does is create a strong, romantic character and a real sense of chemistry with the female lead, Sophia Bubner playing Sister Sarah Brown, the missionary girl. She is copybook perfect in her part. She has to carry some fairly tricky songs with treacherous high notes, but she does so with sweetness and charm, going on to belt out some big ones like If I was a Bell. She has the most beautiful and interesting qualities to her voice.

Ever-loving Adelaide is the other female lead; the showgirl in love with the gangster Nathan Detroit.  And here's one Jeri Williams, an American with a stunning, big Broadway voice, masses of chutzpah and comic presence and, on top of it all, dancing skills. She's breathtaking. And partnered by a peer in the form of Brendan Cooney who has a splendid, distinctive voice along with all the stage skills upon which a comic-musicals player needs to call. These two performers seem almost born to play these renowned roles.  All around them are good players giving their all: Ian Brown, Raymond Cullen, Nathan Quadrio, and Lauren Noble.

This is all done with good sets and costumes and wonderfully spirited and atmospheric choreography which makes all dancers look good. This is a big, blockbuster stage show with a large male ensemble as the New York gamblers and a large female troupe as the Hot Box showgirls. They not only have to turn on a diverse array of dance numbers, but some important choral work. Oh, how beautiful it is to hear the harmonies of these singers. Martin Cheney has them rehearsed to perfection, all the while accompanied by what feels like a massive, powerful orchestra down there in the pit. It is eleven-strong. Its string section is just dreamy. In toto, it has found its balance with the miked voices and it spreads the joy. A lovely feeling of enthusiasm and engagement seems to rise from that invisible underworld and connect itself with the audience. It is not a common phenomenon and it is part of what makes this show so very special.

Buy a ticket to this one - even if you have to sell your children to do so.