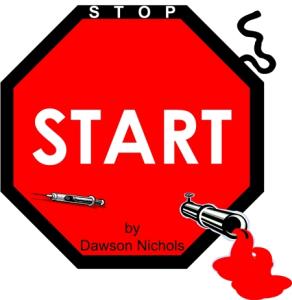 Dawson Nichols, playwright and performer, is a keen observer of the myriad fragments that make up an individual’s life. Like a gifted painter who can distinguish the finer details of light, shade, and colour that define a subject, Nichols perceives the smallest of things that comprise a life event, and he then exercises the even rarer ability of putting it into words in a way that leaves the reader in no doubt what is intended.

Nichols is a wonderful storyteller, and the magic of his stories lie not so much in the plot but in the telling. In fact, his plots are often quite confusing.

To tell the truth, one was not always clear what Stop Start was about, and I suspect I was not alone. When the playwright himself advises the audience at the conclusion of the performance that reading a copy of the script, which is available for purchase in the foyer, will help clarify any nagging doubts, you know that you have been immersed in something quite cerebral (or should that be obscure?).

But this is Nichols’ allure. He is unafraid of tackling challenging (and sometimes quite confronting) narratives and developing them into enthralling pieces of theatre that leave you astonished at his skill as a writer as well as performer.

Clearly Nichols knows his text – he wrote it so that goes without saying – but a lesser actor and director would make a mess of it. From the first moment that the lights bring him into focus sitting alone on a chair on an empty black stage, Nichols’ every movement and gesture, coupled with his uber expressive voice and incredibly clear diction, make for compelling theatre. He slowly and inextricably draws you into the substance abused lives of two estranged brothers – both played by himself – as they lay bare memories of their lives. But it’s not all bleak. There are frequent moments of comedy as the brothers’ recount some of their more awkward experiences, such as the loss of virginity (well, sort of!).

The flow of events is confusing at times. The plot bends time and it is not always immediately clear which character is speaking, but that is part of the pull of the show – having to wrestle with one’s own (relatively) clear mind and give over to one that is the antithesis, one that is addicted to multiple substances and to the idea of rushing towards the end of one’s life because normality is just a state of being insufficiently drugged!

This is wonderful theatre. It is difficult theatre, but it should not be missed. Nichols is a rare talent indeed.