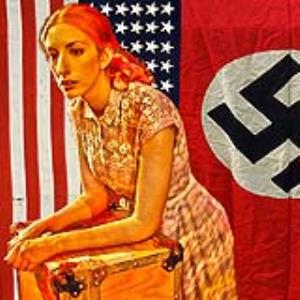 There in a tent amid the jubilant good spirit of Gluttony, we find ourselves in Berlin under a hail of bombs with a terrified teenage girl cowering in a cellar. Tantalising scents of sizzling satays waft through the tent flaps. There's music out there somewhere.

But, there, inside the tent called The Bally, it is Germany. We are riveted and entirely captivated by a young American called Ingrid Garner who is taking us through the extraordinary experiences which befell her grandmother, Eleanor, in WWII.

Hers was the experience of Nazi Germany as a German-American girl.

Eleanor was nine in 1939 when her father decided that a job offer back in his native Germany was too good to refuse. The family left their happy life in Stratford, New Jersey, but were only half way across the Atlantic on the German ship, SS Hamburg, when Hitler invaded Poland and it was clear this trip was a bad idea. The ship changed its funnel colours to protect its course and the family landed in a very troubled Germany with no choice but to make the best of it. They could not go home. Thus did young Eleanor learn to salute Hitler and, in due course, join the Hitler Youth, because it was the fun thing to do if you were a kid in Germany. Thus did she experience the evolving misery of a country gripped by paranoia, fear and deprivation.

Ingrid Garner seems genetically coded to deliver this unusual war story. Such power and conviction does she bring to the role that one forgets entirely that it is not her own story, that she is not Eleanor.

She is a very beautiful young woman with a good voice and excellent dramatic discipline. She performs wearing a very simple but exquisite frock and scant makeup. Her props are just a travel trunk and two chairs and there is a small screen on which a few crucial images are projected to illustrate the history she is describing.

Her audience emerges from the plush little tent theatre into the hot early evening still misty-eyed from the seeming immediacy of her bomb-shattering vignettes and just a bit in love with this marvellous American girl for being no less than the sacred keeper of her grandmother's story.

Where: Gluttony – The Bally