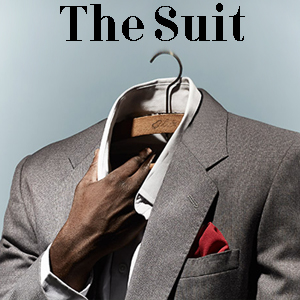 Philemon can't help himself. His retribution may be non-violent but it is more agonising than satisfying in the end of the day. In punishing another, one risks punishing oneself.

Philemon had such a perfect life that even living in Sophiatown, one of South Africa's most deprived townships, did not depress him. He adored his beautiful wife, Matilda, making her breakfast each morning before catching the bus to work. Then a friend tipped him off that Matilda had a gentleman caller. He rushed home and surprised them. The lover ran off in his undies leaving his suit behind. Philemon punishes Matilda by insisting that the suit is now an honoured guest. He orders her to serve it dinner at the table, to sit it up in the bedroom and to give it permanence as the star of what is to become a very strange ménage à trois.

This play began in the 1950s as a short story by Can Themba and has since gone through several incarnations as a stage play; this latest English version is now circling the globe as a Peter Brook production of rather sweet simplicity.  It is presented here by the State Theatre Company in association with Arts Projects Australia, the SA Tourism Commission, Adina Apartment Hotels and the Adelaide Festival Centre.

The set is dominated by brightly-coloured chairs which are moved about in various permutations along with several mobile frames and tables. It is the three-man band, its versatile musicians joining in as characters, which dresses the stage most effectively, not only adding life and humour but a soundscape of rich diversity. The musicians also accompany Nonhlanhla Kheswa who, as the oppressed wife Matilda, craves to express herself through song. Her lovely voice is a strong element of the production. Her songs echo Miriam Makeba, Nina Simone, and Zap Mama.

Ery Nzaramba completes the cast as friend, lover and narrator.  He facilitates some of the political commentary which anchors the play in the oppressive era of South Africa's history. These black workers did not care for their white employers. But in their own society, they were rich in community, stories and music.

The direction, attributed not only to Peter Brook but also to Marie-Helene Estienne and Frank Krawczyk, keeps the pace of the play unhurried - an easy township tempo. For a while, it becomes almost painfully slow. Then it lifts dramatically as Philemon throws a party.  Nzaramba leaps into the auditorium and charms audience members to come onstage and join the behatted musicians as guests. It all works well until The Suit arrives.

This precedes the play's touching denouement which is quietly profound and quite unforgettable - as is the whole production.

The Suit is essentially a sad play but its delivery is deliciously imaginative.

In the Sophiatown simplicity of the set, the only props are The Suit and a couple of blankets. The actors very skilfully mime all other embellishments such as meals and travel. Here, William Nadylam, as the hurt husband-cum-cool tormentor is simply a joy to watch. It is a good cast, but he is an exceptionally engaging, star-quality actor.

And so it comes to pass that opening night audience members clapped until their hands hurt.

When: 1 to 12 October
Where: Dunstan Playhouse
Bookings: bass.net.au