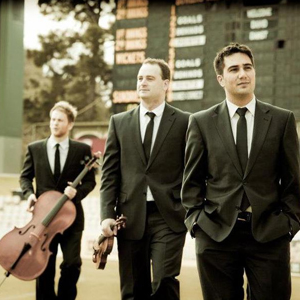 Half the battle in any concert is to get the programming right, and the Benaud Trio gave an object lesson in just that with ‘Horizons’.  It featured a very recent hip composition, some old favourites from the romantic repertoire and an encore of well-known James Bond themes that had been tweaked for a piano trio.  Eclectic and utterly entertaining, for young and young at heart!

Nicholas Buc is a young Australian composer/ arranger/ conductor who already has an enviable list of credits across a range of genres, and his ‘Trailer Music’ was commissioned by the Benauds for their 2010 season.  It is episodic in nature and was inspired by the two-minute musical grabs that are used to promote films.  The individual sections were fused together to create an exciting whole that allowed the trio, comprising Amir Farid on piano, Lachlan Bramble on violin and Ewen Bramble on cello, to amply demonstrate their substantial technique and musicality.

Schubert’s ‘Notturno in E Flat’ is one of the most achingly beautiful pieces for trio.  The Benauds captured all the tenderness it demands and played it at a sufficiently comfortable tempo to allow the tonalities to be distinct and to allow the dramatic impact of the middle section to come through, although the dotted rhythms were perhaps too accentuated on the piano.

Johannes Brahms ‘Piano Trio in C Major’ is a veritable treasure trove of lyrical themes.  Brahms is a master of the art of variation and in this particular trio he serves up a richly varied musical menu for the trio.  The violin and cello often play together in octaves as if to join forces to counter the force of the piano, and the Bramble brothers demonstrated a deep understanding of each other that gave their playing an ‘edge’.  The syncopated rhythms of the second movement were at times under-stated but the sublime approach to the tense and nervy third movement blew this slight misgiving away.  The phrasing in the finale was superb, and the whole thing came home with ecstatic but controlled exuberance.

The Benaud Trio are a joy to watch and hear.  They are a relatively young ensemble, but they are already highly accomplished and well regarded.  Their James Bond encore was brim with humour but was musically ever so tight.  Whoever arranged it (Buc?) has produced an absolute gem, and demonstrates that the piano trio genre still has much more to say.

The Benaud Trio’s next concert in Adelaide is on December 14 and will feature the music of Astor Piazzola.  That will be a test – Piazzola’s music is unforgiving in the wrong hands – but I’m sure the Benaud Trio is up for it.