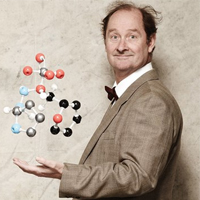 Vere (Faith) is writer John Doyle's love letter to his father.  In this play, he transposes his father's dementia onto the famous Australian archaeologist, Vere Gordon Childe, in an exploration of mankind, meaning and sense of self.

Academia was the pool Childe swam in and the play begins there with the first act subsumed by some beautiful satire of the academic types.  However, Vere learns that he is to inexorably disappear in body and mind with rapidly progressing diseases.  Students, lecturers and the Vice Chancellor - the latter played with great pomposity by Geoff Morrell - celebrate end of term with a bottle of Grange and lesser vintages.  But we know this is really good-bye in a big way and the whole thing has an aching poignancy that I am reminded of simply by writing about it now.  The act was capped off by Kate's teary and knowing vale so admirably played by Rebecca Massey.

The play was complete in what turned out to be the first act - a one hour nugget that leaves you imagining what was to become of old Vere.  Unfortunately, Doyle decided also to show us what happened in the second act and we are treated to such scenes as an old man shitting his pants and messing the carpet, a feeble-minded minister and his feeble-minded wife battling out a meaningless creationist-rationalist dichotomy with Vere's son and his wife, some drawn-out stargazing and an unlikely suicide by a demented person.  The only interesting thing in the second act was the set designed by Pip Runciman with its endless monotonous doors.  Director Sarah Goodes made the whole thing fluid and natural.

And Vere, he was played by someone I have long missed on stage, Paul Blackwell.  This was perfect casting- Blackwell's Vere was warm and funny and befuddled and sharp and angry and had all the signs of a brilliant and caring mind in the first act and a confounded one in the second.

When: 12 Oct to 2 Nov
Where: Dunstan Playhouse
Booking: bass.net.au