The Ballad of the Unbeatable Hearts 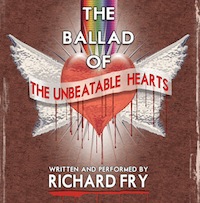 The Ballad of the Unbeatable Hearts is the heart lifting story of a young gay man who fails in his suicide attempt and who then accepts his homosexuality and goes on to establish, grow and lead a spectacularly successful gay support organisation that gives hope, direction and fulfilment to countless others and changes the world.

The structure of the play is complex.  Writer and solo performer Richard Fry plays a number of characters who each have their own clear voice at different points in time–the past, present and in the future–but it is never confusing.  Fry easily and convincingly moves between them, and in the role of narrator he delivers an incisive array of explanations, impassioned speeches and humorous asides directly to the audience.  He takes you in.  You feel you are part of his world, and it is unnerving and liberating and frightening and happy, and ultimately a call to action–to counter hate.

The text is written in verse that moves between a range of poetic forms, but never gets bogged down.  The metrical structures and rhyme never get in the way of the message or the choice of text, and rhythms are exploited to great effect and have a physiological effect on the listener.  At times I could feel my own pulse and breathing quickening or slowing in sympathy to what was unfolding before me on stage.

The ending of the play is savage–there is a huge twist that almost guts you–but as you leave the stark and untrammelled simplicity of the venue, Fry’s message of compassion is firmly in the front of your mind.

This is compelling theatre, and Fry’s performance is moving and gripping.  Yes, the subject matter is bleak at times, but as director Guy Masterson says in his programme notes: “Great theatre should be a tempest of energy illuminated by flashes of blinding communication where the audience are on the receiving end of a theatrical thunderbolt.  It should be an experience that no other medium can provide.”  Richard Fray and The Ballad of the Unbeatable Hearts do just that.