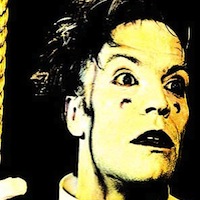 Scaramouch Jones is an outstanding piece of theatre beautifully written and masterfully performed by Justin Butcher.  It is another exemplary production from Guy Masterson’s Centre for International Theatre.

The story is almost a self-eulogy.  It is New Year’s eve 1999, and it is the eve of the 100th birthday of the clown Scaramouche Jones.  It is also his final performance–ever–because tonight he has chosen to die.  There is nothing more he can possibly achieve in this life, and he tells us why.  Regaled in bald wig, white face, red nose and baggy costume, Scaramouche takes us on a richly described journey through his long and eventful life.

His out-of-the ordinary life begins with his birth to a prostitute mother on a fishmonger’s slab in a port in Trinidad.  At a young age he is sold into slavery several times and eventually ends up in Africa as an assistant to a snake charmer where he tours bazaars and other exotic places.  He then joins the Italian navy, goes AWOL, and travels with gypsies to Krakow where he ends up in jail.

During WWII he finds himself incarcerated in Auschwitz where he is put to work as a gravedigger.  Strangely, he finds solace in providing a moment of joy in the wretched lives of young children by performing mime and distracting them at the final terrible moment of their murder.  It is this act of humanity that absolves him of complicity with the Nazis and war crimes.

Like layers of theatrical make-up, each troubled episode of his life learns and takes strength from the previous one, and prepares him for the next.  His life is one of accumulated and remarkable experiences.  After the war he finds his way to England and clowns for the next fifty years as a preparation for his swan-song.

Butcher’s richly embroidered script is a remarkable demonstration of the power of simile and metaphor.  It has a lilt and a structure that gives it power, gravitas, tragedy, humour and excitement.  Butcher’s performance was mesmerising and fluid.  His stagecraft was as good as I have ever seen, and a lesser actor would not have been able to carry off the sustained effort and concentration that was needed.  For nearly ninety minutes he held the audience firmly in his hand as if it was his personal play thing, and we loved it.