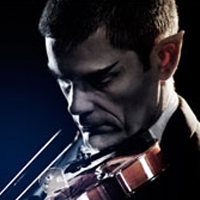 Darth Vader, Luke Skywalker, Stormtroopers and other out-of-this world personalities were out in numbers at the Entertainment Centre Theatre last night to enjoy “Space Classics” - the sixth and last for the year in the Adelaide Symphony Orchestra’s Showcase Series of concerts.  The music was wonderfully familiar, the ASO’s musicality was fantastic, but the tone was definitely light hearted, relaxed, fun and toe-tapping enjoyment was the order of the night.  The diverse audience ranged in age from 5 to 95, and their enthusiastic appreciation was on an intergalactic scale.

After Darth Vader warned us to ensure our mobile phones were off (or in space flight mode) and ET asked us NOT to phone home, British maestro Anthony Inglis launched the orchestra into an impressive performance of the ever-popular initial fanfare to Richard Strauss’s tone-poem Also Sprach Zarathustra, which was iconically used in Stanley Kubrick's 1968 film 2001: A Space Odyssey.

A feature of the concert - no, the event! - was an impressive light show that bathed the audience and orchestra in a remarkable spectrum of cosmic colors that changed in sync with the music.  There were also roving cameras which projected images, on giant screens flanking the stage, of close-encounters with members of the orchestra as they performed.

The fanfare was followed by the Main Title from Star Wars, the theme to Close Encounters of the Third Kind, The Imperial March and Yoda’s Theme from The Empire Strikes Back.  Then it was a return to the classical repertoire with Johann Strauss’ Blue Danube Waltz (which was also used by Kubrick as an association between the spinning motion of satellites and the dancers of waltzes).  This segued neatly into music concerning a much larger satellite - namely the planet Mercury - with music by Gustav Holst from The Planets Suite.  Compositions by John Willams made a return with music from Return of the Jedi - the roving camera focusing on Peter Whish-Wilson on tuba playing Jabba the Hutt, and the first half of the program finished, to the delight of younger members of the audience, with the Theme and End Title music to ET The Extra-Terrestrial. 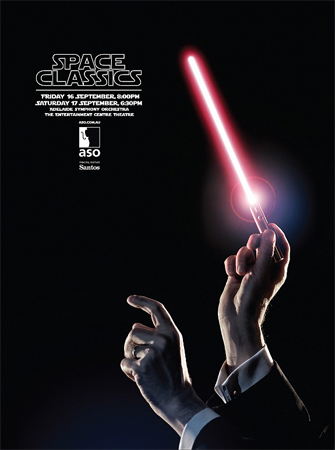 During the interval those members of the audience that had dressed up as their favourite space character paraded under the colourful orb outside the Entertainment Centre hoping to win the fancy dress competition.  The prize, a boxed set of the complete Star Wars Saga on blu-ray - not to be sneezed at!!

The second half of the program begun with Mars from the Planets Suite, and the orchestra was symbolically bathed in eerie red light.  It was followed with music from Attack of the Clones and the Duel of the Fates from The Phantom Menace, which demanded and received strength and precision staccato from the cellos and double basses.  Stirring stuff indeed, and met with thunderous applause!

The audience was then treated with Inglis’ own arrangement of the Introduction to Star Trek: The Movie, followed by the Main Theme, and then Jupiter from The Planets, which includes the popular but overplayed central melody that has been arranged to the words of "I vow to thee, my country."

The orchestra then wound back the clock back to the 1960s and Inglis led the audience in a loud countdown to the Thunderbirds are Go March from the TV series Thunderbirds.  To finish the programme Inglis tore off his dinner shirt to reveal a Superman t-shirt and the orchestra launched into a spirited performance of the March from Superman.

The crowd was enthusiastic and generous in its applause and was even more appreciative when Inglis returned to the stage via the audience disguised as a Jedi Knight brandishing his light sabre, to lead the ASO in the End Credits to Star Wars as an encore.

Maestro Inglis was perfect for the event.  He doubled as MC and was witty and knowledgeable with his introductions to the music, and he had warmth and charm in buckets and connected with the audience wonderfully (take note Bill Collins.) He controlled the orchestra in the acoustically challenging Adelaide Entertainment Centre Theatre, and with the professionalism and competence of the sound engineering team, the music was rarely unclear.

The ASO’s Showcase concerts are truly accessible.  If you have not been to one, don’t hesitate to book next season, and may the (musical) force be with you!