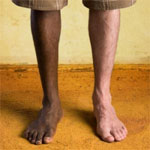 This new production for Brink is a three-year collaboration of writer Sean Riley and director Chris Drummond which explores the life of an Australian photojournalist returning home after a career spent on the African continent.

The Odeon theatre is the perfect venue for this production. A simple set consisting only of a sandy floor and textured back wall fills the space. The wall is used for the projection of moving video images and still photography. Projection features quite heavily in this production. It is used to great effect, acting like another player in the show rather than just highlighting scene changes and locations.

This production is well worth a look but be sure to bring your concentration goggles. Local African immigrants have been cast in the roles of the natives, their authenticity speaks volumes, however their accents can often be difficult to understand.

The production follows a fictional character by the name of Skip Miller. Skip is a celebrated photojournalist who has spent years documenting the war zones off Africa and the faces off the dispossessed. A somewhat transient being, he finds it difficult to fit in both at home and abroad and struggles emotionally both as a loner and in his relationship with girlfriend Allison Caldicott.

The show jumps back and forth in time between Australia and Africa, sometimes showing scenes from the past, sometimes playing action from the present. It deals with the issues of relationships, poverty, love and sacrifice all against a backdrop of provocative African portraiture.

Chris Pittman in the lead role of Skip Miller is a joy to watch, his internal struggles are clear from curtain up. Assina Ntawumenya plays Skip's principal photography interest Patience Lugor. Ntawumenya is beautifully natural, though occasionally difficult to understand. Her character has clearly experienced the suffering this tale suggests. Rory Walker is Skip's brother Neville Miller. Walker has a beautiful naivety and exposes his insecurities with such honesty. Lizzy Falkland plays Skip's partner Allison Caldicott with strength and conviction. Her characterization as the journalist is the perfect balance to Skip's transience. The rest of the cast includes Adolphus Waylee and Mondli Makhoba, both who give solid characterisations.

Technically this production was stunning to watch. Designer, Wendy Todd and lighting designer Geoff Cobham have created the perfect world for this script. Scored by a live band the music heightens emotion and underpins the tension.

A show which should not be missed, Skip Miller's hit songs, is an emotional journey without a happy ending. You might not leave the theater dancing a jig but you will be touched and moved.