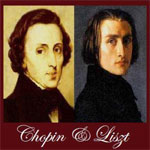 Young and accomplished prize winning Adelaide pianists Marianna Grynchuk and Jonathan Heng curiously bill their Fringe performance as a “celebration recital”.  Their program exclusively featured the music of Chopin and Liszt, including three of Chopin’s Scherzos, a Mazurka and two Etudes, and three of Liszt’s shorter pieces —Valse Oubliée, La Campanella, and Liebesträume— and his powerful Mephisto Waltz No.1.

Liszt and Chopin were contemporaries of each other – born one year apart.  Their music is very different—some say Chopin’s is superior— but they admired each other very much.  Liszt is bravura, showmanship, visceral, and often deeply spiritual, while Chopin is more poetic, intricately constructed, melodic and melancholic.  They were the piano ‘greats’ of their day and the relevance and enjoyability of their oeuvre persists and is timeless.

Grynchuk began the recital with the Scherzos.  She attacked the opening of the popular Scherzo No. 2 and excelled in the slower and more ruminative sections of all three of the Scherzos where she was in full control of the tempo and brought out the lightness needed in the right hand.  For an encore she played Liszt’s glorious paraphrase of the Act 3 quartet in Verdi's Rigoletto, and allowed the four voices to come through clearly and distinctly despite some minor problems with the high rate of octave repetitions.

Heng’s performance was studied and impressive.  His program choices had immediate appeal to the audience – they were more familiar, and were showy – very fitting for a Fringe event!  The Chopin Etude Op. 10 No. 5 – the so called ‘black keys’ Etude – was played with strength, precision and pace, and the left hand never overpowered the melody and tintinnabulation in the right.  The same was true of the delightfully playful La Campanella.  Liebesträume was the calm before the storm that was the Mephisto, and the concert had truly become a celebration of the majesty of the romantic piano.