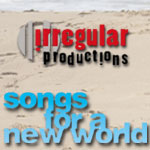 Songs for a New World is a premiere for South Australia and there aren't many hints from the publicity what it's about. Traditionally a musical has both narrative and song, consistency of characters throughout, a protagonist, antagonist and conflict to resolve (the fundamentals of a story). This show however, doesn’t have this kind of structure. It is described in the production notes as a song cycle. I had planned on letting the production speak for its self, however the human desire to find meaning is strong and after three songs of wondering what it was all about I was forced to read the program.

Directorial notes by Andy Ahrens made it clear. I had been searching for a narrative, where in fact there wasn’t one, Ahrens even admits to not attempting to create one, rather staying true to each songs own story. With this information in mind, I sat back to enjoy the concert.

Each number is performed by one or more of the 4 cast members with token costuming and choreography to avoid the production becoming stale. This show however, lacks relevance, and the regular shifting and changing of characters, despite them all being on a similar journey, feels disjointed.

In stark contrast to the quality of the writing are the performances. Each of the cast sings and performs beautifully. Mark Oates sings at his usual outstanding level, delivering a passionate yet gentle performance. Joel Valenti belts out some incredible numbers including ‘The Steam Train’, demonstrating his range and vocal ability. Meg Tucker is sweet and impassioned in her many roles, and Megan Humphries shows her great ability to switch from diva to comedian in the blink of an eye. Under the skillful hand of Peter Johns as musical director the orchestra and cast never miss a beat.

But does it all work? It would seem the audience is divided on this. Some songs are great and some not so much. All the performances are outstanding yet the writing and structure feels weak. What audiences can be guaranteed of is a pleasurable night of music from some of Adelaide’s top performers, just don’t search too hard for context – because you will always come up short.