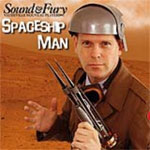 Sound and Fury are an outstandingly funny comedy trio that bill themselves as proponents of nouveau-vaudeville.  They have been wowing Adelaide Fringe audiences for a number of years – this is their fifth festival - with wonderfully inventive shows like ‘Testaclese and Ye Sack of Rome’, ‘Private Dick’, and ‘Sherlock Holmes and the Saline Solution’.  They won the People’s Choice Award in the 2008 Fringe.  To say that theirs is clever comedy is an understatement.  They use and abuse ideas from subjects as diverse as physics, mathematics, politics, and literature, and mix it all with a dash of always-funny and never offensive smutty talk and mad cap antics.  They are masters of improvisation – you are never really sure whether what they have just said is scripted or completely improvised, and they thrive on feedback from their audience!  Like good farce, the story line of their scripts is absurd, but they tell it with such mischievous sincerity that you don’t care.  Apparently their current show – Spaceship Man – is about Major Cyrus ‘Cy’ Fie who comes out of retirement to travel to Mars to stop a rogue officer who's taken the law into his own hands, but I didn’t really notice – I was too busy laughing at the avalanche of funny one liners and double entendres from three of the funniest guys around.  You have to go and see this one!