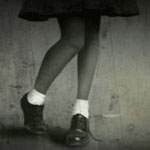 Written by David Harrower and produced by Flying Penguin productions in association with the Adelaide Festival Centre’s InSPACE program, Blackbird is the revisited tale of an illicit relationship between Ray and Una. Set 16 years after the event, in a staff room at Ray’s place of employment, Una comes to confront him. Now an adult she has some unanswered questions, and despite the fact he has now changed his name to Peter, and moved on with his life, she has tracked him down via a photo she saw in a magazine.

Una believes that her life has been ruined by the molestation and sexual harassment that she has experienced at the hand of Ray, yet admits that she did in fact love him – and that everything she now believes is more likely a product of what she was ‘told’ happened by her family, friends and social workers. Ray has been imprisoned, served his time, and labeled a pedophile, but managed to escape his past life, change his name and move away. He now keeps his identity and his past a secret from his colleagues and his partner, and attempts to forget what went before.

As the story unfolds the characters emotional states grow and change, morphing from rejection and denial, to insincerity, dishonesty, hate and lust. This requires great skill from the actors, and both Terence Crawford and Ksenja Logos deliver in spades. 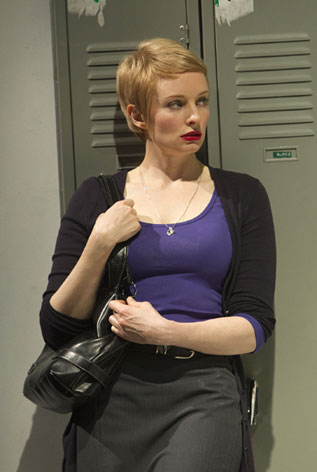 The production takes more than a few minutes to warm up too, but once you begin to understand the characters insecurities, you see the real people develop behind the text and inside the very real issues they are each dealing with.

The set is functional, and serves two main purposes. The location helps to create context and a few references are made to it early on, but this piece could have played out anywhere. The space is a simple staff room/cafeteria that blends out towards the audience into a junkyard with mounds of garbage bags and rubbish edging it. Sound was used effectively as a supportive element to create and heighten emotional tension.

A lot of the scripting is in past tense, but a particularly effective part of the text is when the characters reminisce through monologue with continuity of time and space about their first sexual experience away together. The actors step out of the “staff room” and into the “junkyard” where they seem to metaphorically offload some rubbish of their own, before coming back together in the space. This worked effectively until later in the show when the two spaces were incorporated in time, destroying the beautiful segregation it had earlier created.

Ksenja Logos and Terence Crawford were both outstanding in their portrayals of the difficult roles. Working together perfectly, the 90 minute production just flew by.  A lot of thinking was done by all on exit from the auditorium, and I suspect a lot more in the weeks to come. A challenging, interesting, brilliant piece of theatre – this is not one to be missed.