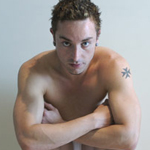 ‘Four Faces’ is the artistic delineation of life as a gay man told through 4 different characters in dance. Jay Robinson in collaboration with, Anton, Gerard Van Dyck and Troy Mundy presents four solos each dissimilar from the next but all connected by the theme of homosexuality.

The first solo by Robinson, deals with the struggles faced by gay men growing up, understanding their desires and the impact of their preference on family, friends and social positioning.
The second piece choreographed by Robinson and Anton encapsulates the difficulty of connecting with a ‘superficial society’.

The third solo, by Robinson and Van Dyck incorporates a combination of acting and dialogue in conjunction with the movement, to challenge the stereotypical themes of modern society and explore the ‘masculinity’ of gay men. Jay also explores more universal themes of confidence, self importance and sex – confronting the audience with, often, explicit scenes of sexual exploration.
The final solo, by Robinson and Mundy approaches the 21st century themes of internet dating, web cam chat and individuals described by an electronic profile. Robinson showed us his characters resistance to these forums and eventual surrender and acceptance of them as loneliness and desire took over.

The piece was clearly very close to Robinson’s heart. His expression through dance was commanding and poignant and continually connected with the audience. Robinson showed great stamina and focus. He worked tirelessly in pursuit of the message and the audience showed great appreciation for his dedication in the form of a standing ovation.
The themes explored by Robinson were universal and held messages for all sexual orientations. ‘Four Faces’ was a moving performance which left everyone thinking.