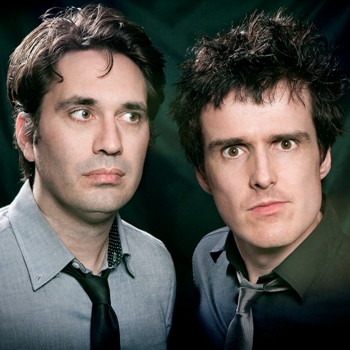 Chris Taylor and Andrew Hansen of ‘The Chaser’ fame have taken to the stage in their favourite old town… um… Adelaide? (in-joke) with a new live showcase.

In true ‘Chaser’ style, this live show takes its content from real life and then parodies it. With a good mix of themed stand up and song, the pair have great control of the room and really keep the pace of the show hopping along.

Crammed like sardines into the Paradiso Spiegeltent, the audience still loves every minute of the 1 hour show. Familiarity with the pair certainly works in their favour, as their own unique brand of humour cuts through the act.

There is a handy instructional section on how to be the most annoying person on Facebook, a song for every outraged old person to relate to, and some onstage romance between a pair of (recently un-closeted) cops, whose love for each other and the law – or “laws” – becomes a source of conflict.

Naturally nothing is safe – not even Rolf Harris – but rest assured the boys could still be clearly heard over the whirring sounds of the Clipsal 500, which seemed to be located just outside the tent!

Their run is a short one, but one well worth catching – so if you miss it this time, well to quote the publicity, “An unforgettable evening of songs and laughter is guaranteed, in a different theatre nearby…” so don’t sweat it!