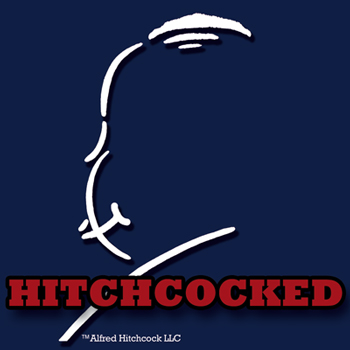 ‘Hitchcocked’ is one of the latest shows from Sound and Fury, and it is rather different.  It is much more structured compared to many of their other shows, and it relies much more on technical elements.  ‘Hitchcocked’ is a homage to the filmography of the great Alfred Hitchcock, but it is not about any of his films in particular, although there are humorous references to a number of them, such as Mt Rushmore in ‘North by Northwest’, and troupe member Richard Maritzer does try and channel Cary Grant quite a bit!

A highlight of the show was at the very start when a tightly edited sequence of video grabs of Hitchcock himself was projected onto the covered face of troupe member Ryan Adam Wells to create the illusion that the famous man himself was actually introducing the show.  It worked a treat and must have taken a veritable age to put together.  (Remember the Hitchcock Hour on TV?)

The rest of the show made significant use of additional video and other sound and lighting effects.  Some of it worked very well but it was a little ‘clunky’ and perhaps interrupted the flow of the show at times.  After all, Sound and Fury are at their very best when they voraciously feed off the audience and allow themselves the opportunity to improvise almost at will.  The tight script perhaps constrained them a little, and the ending of the show sort of fizzled out.

The audience participation was perhaps a little overdone as well, with a major component requiring an audience member to read out a part for several minutes.  The audience chump was very obliging and clearly enjoyed himself – perhaps a little too much – but mistakenly thought it was all about him!

That aside, the show was full of Sound & Fury’s usual tomfoolery and clever puns that produced the usual wails of laughter and good-humoured derisive groans of disbelief.  Patrick Hercamp was again excellent in his various drag roles.  He clearly wouldn’t win any prizes on Rupaul’s drag race, but he is just oh so funny, and his stage-craft is the ant’s-pants!

As one audience member loudly and appreciatively stated after the last curtain call, “Now, that was something different.”

When: 14 Feb to 2 Mar
Where: Gluttony – The Bally
Bookings: adelaidefringe.com.au