The Bridge Of San Luis Rey 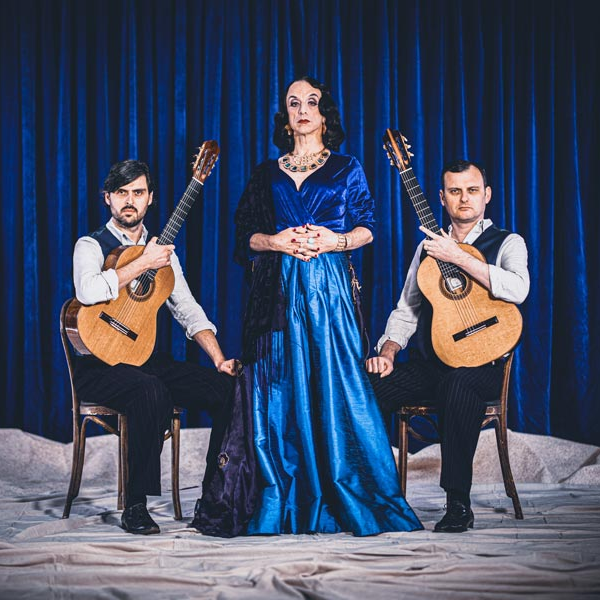 Is he beautiful or is he grotesque? In his fire red lipstick and swirling Spanish gown of electric blue, Paul Capsis is a phenomenon of strange allure.

Highly mannered, he flicks his bewigged head from one side to another to present his magnificent profile. He is, for the moment, the haughty Perichole, greatest actress of 18th Century Peru, and she has stories to tell; stories of love and cruelty, of splendour and despair. These are the tales of those whose lives were lost to the collapse of the ancient rope bridge woven by the Incas: The Bridge Of San Luis Rey. Every time the actor enunciates the name of the bridge, it rings out like the striking of a beautiful bell.

This is the contemporary reimagining of the great Thornton Wilder novel which took out the 1927 Pulitzer Prize. Adapted for the stage by Phillip Kavanagh, it is a Brink production directed by Chris Drummond under the auspices of the Adelaide Guitar Festival. To that end, the festival’s artistic director Slava Grigoryan is onstage with fellow classical guitarist Manus Noble of the UK. These sublime musicians book end the narrator and illustrate the dramatic undulations of the five tales. Sometimes they are a part of them with flamenco flourish. Sometimes they are a moody musical mirror. Sometimes the beauty of their classical exposition is transcendental and the audience may just drift into its being.

Paul Capsis, meanwhile, is tackling one of the most challenging roles ever thrown at a performer. Since The Bridge of San Luis Rey is a book, he carries the book and for various stretches of stories, he reads from its pages. There are so many words. Oh, so many words, so complex in the separation and intertwining of the tales of the bridge’s victims. Timing is all. And the audience must concentrate.

Sometimes he is a clown, a pastiche character of large teeth in a huge red-rimmed mouth, mocking and hamming and taking theatricality to its stylised edge. He draws a laugh here, a chuckle there. That mouth is extraordinary. Sometimes he has prima-donna tantrums. And sometimes, he sings. The Capsis forte. Lovely, albeit the Sia Chandelier parody grates.

The play is a tour de force of fabulist verbosity, sometimes seeming steeply uphill, relieved only by the strains and strums of the guitars. One is watching a performer hard at work, changing narratives and genders and costumes in a round world of brilliant blueness. The Jonathan Oxlade set is a circular dais backed by curtains which open onto projected designs and sometimes silhouettes of the performers. Spotlights shaft in from all directions and the blue night takes on many forms. It is its own work of art.

Indeed, it is all very Brink and Drummond in its deceptive simplicity. Three people on one small stage and one huge experience.